Fiesta drivers up and running

After a round on gravel and tarmac, we caught up with how the runners and riders are getting on after round two.

BRC newcomer Ruairi Bell leads the way with 16 points in a brand-new EDSL Sport Fiesta. Bell finished seventh on the season opener before a strong fifth on the West Cork Rally – the best result for a Fiesta in Britain’s premier rallying series so far this season. Setting some impressive stage times on the Irish asphalt, including a stage topping time on the Clonakility-based event – Ruairi is starting to gather momentum in the BRC

“We had a really fun event – the times were good. As the stages dried, it became a lot more predictable and it made it a lot easier to drive the car. We are still learning this new car and its full potential. I am really glad to have two finishes – that’s the most important thing. You have to just keep going and going and eventually the times will come.”

Scottish rising star Finlay Retson has also shown flashes of brilliance in the 2019 Fiesta and is tied on points with Bell after the opening two contests.
It was never going to be easy to come to West Cork and just be out front,” says Retson.

“No one has really driven the 2019 specification cars on Irish lanes before so we had to find our own settings and I had to find what driving style suited that set-up best. It was undoubtedly a very steep learning curve but the main thing is we stayed out of trouble and scored more valuable points for the season. It’s a long year so every point certainly counts at this stage.”

Bart Lang has nestled himself into third in the standings in his older-specification Ford Fiesta and is revelling his step-up into the Junior BRC and having a turno-charged car at his disposal.
“I could see why Irish tarmac creates such a buzz! I don’t think the little Fiesta has spent so long on the limiter in 5th gear before, except perhaps in it’s JWRC days.

“Our pace wasn’t stunning at the start, we needed the time to learn. But the times we did put in on a number of stages later on in the event were really impressive. So overall, a fantastic weekend with huge improvements, but tinged with frustration of the disadvantage we’re at compared to the newer cars.”

While Lang may be frustrated at the wheel of his older-specification car, reigning Cadet Cup Champion Jordan Reynolds has not had luck on his side so far this season. The Englishman hasn’t finished an event this year despite being in class leading positions on both the Cambrian and Wets Cork. Reynolds spoke on the disappointment of the last round.

“We were driving along and the car cut out and a load of warning numbers and lights came up on the dash and it just wouldn’t go again. It was massively unfortunate as we were going really well – but that’s rallying unfortunately. Pirelli is the next round so we will take some positives away from this, regroup and go again.”

The next round of the series will be the Pirelli International Rally at the end of April – with the BRC returning to the famous gravel of the Kielder forest complex. 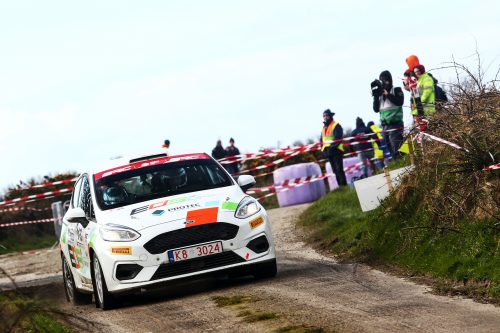