The forests of Cumbria came alive today (Saturday 30 April) with the sound of high-speed rally cars for the third round of the MSA British Rally Championship. The opening day of the Pirelli Carlisle Rally was to be a dramatic affair with championship leader Elfyn Evans holding the lead initially before a stage three puncture brought Fredrik Ahlin into the pound seats coming into the overnight halt.

After the Ceremonial Start at the Pirelli factory, the opening stage saw fast and furious action through the 8.73-mile ‘The Shanks’ test. The BRC pace was blistering right from the off with the purpose built four-wheel-drive cars exceeding the mandatory ‘bogie time’, with several drivers averaging over a staggering 70 mph through the picturesque stages. Elfyn Evans, Fredrik Ahlin, David Bogie and Matthew Wilson all matched the time putting them joint fastest on the opening run.

On the second stage Elfyn Evans used his recent World Rally Championship outings to good effect by easing clear of the chasing pack in his Ford Fiesta R5. Ahlin, Bogie and Wilson all followed suit with Tom Cave rounding out the top five at the mid day remote service with 23.4 seconds separating the leading group.

Stage three – Roughside was to live up to its name and reputation as several drivers experienced punctures through the fast, flowing gravel roads. Rally leader Elfyn Evans was the first victim and haemorrhaged time on the short 7.16-mile test. The leader plummeted down the leaderboard but with a strong final stage he clawed their way back to fifth overall coming into the Carlisle Service Park. With Evans’ demise, up stepped Swedish superstar Fredrik Ahlin (Ford Fiesta R5) who inherited the rally lead and ended the first day with a small margin of just 7.3 seconds ahead of CA1 Sport teammate David Bogie in his Skoda Fabia R5.

Matthew Wilson who returns to Britain’s premier rallying series after an 11 year absence got straight back into the groove, setting top four fastest stages times throughout the day to nestle himself in the top three and put him in the hunt for overall victory in his Fiesta R5. Welshman Tom Cave (Fiesta R5) is fourth while Marty McCormack in his naturally aspirated S2000-spec Skoda Fabia rounds out the top six.

In the DMACK Junior British Rally Championship it was to be a close fought battle between three drivers in three different car marques. Norwegian Sindre Furuseth in his Renault Twingo R2 returns to the series after missing the Circuit of Ireland and showed his class by establishing himself at the front of the pack. Furuseth also suffered woes on stage three with a puncture dropping him down to seventh at the end of four stages. Junior BRC Championship leader Robert Duggan in a Vauxhall ADAM R2 stole the march and stayed clear of major dramas to end the day a minute ahead of Gus Greensmith in his Ford Fiesta R2T.

BRC2 Leader Matt Edwards in his rapid Mitsubishi Evo 9 also fell foul of the rough conditions but managed to limp the car complete with puncture through stage three to hold the class lead at the end of the day ahead of Spencer Wilkinson in his Subaru Impreza.

In the other BRC classes Chris Wheeler leads BRC3 while in BRC4 Roger Platt holds the advantage over Tony Simpson. Tom Williams became the first competitor to enter BRC5 and set some respectable stage times in his R1 specification Ford Fiesta.

The BRC National cup for MSA logbook cars saw Scotsman Donnie Macdonald attack the stages in fine style. The Mitsubishi Evo 9 driver fended off a brace of Mitsubishi Mirages in the hands of Welshman Jamie Jukes and Swede Robert Blomberg. The trio will resume battle over the three remaining stages tomorrow morning.

“It is great to be in the lead, we are really happy with how things have gone today. I am struggling with the gearbox as I have quite short ratios for the fast stages but we are just going to keep up what we are doing and see what happens tomorrow.”

“Second is good, we had a really strong day but I think I need to tidy my driving up slightly. It will be good to go away now, think about things and have some food, relax and come back fighting. We have to push for the win tomorrow.”

“It feels really good to be back in the BRC. I have really enjoyed it and to be back driving the likes of Pundershaw is brilliant. The conditions were perfect and really nice to drive. I want more of the same tomorrow, we have been getting better with every stage and tomorrow we are going to go for it and challenge for the win.”

For full results visit the results section on www.msabrc.com 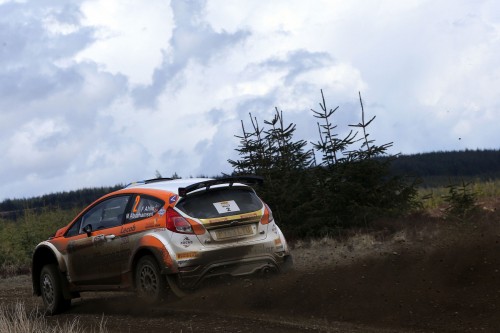