Sindre Furuseth is turning heads in his first season in the MSA British Rally Championship as he has emerged as one of the frontrunners in the DMACK Junior BRC category in his Renault Twingo R2.

The Norwegian driver came into the opening round in Mid Wales as a bit of an unknown heading to the stages. Immediately Furuseth raised a few eyebrows as he elected to play his ‘Joker’, one of only five drivers electing to do so.

His blistering pace from the outset really started to turn heads as the driver from Raholt held an eight second lead after the first evening of competition making the opposition scratch their heads on their own performance. The R2 Twingo sung through the snow-lined tracks of mid Wales as he had a day long, ding-dong battle with Gus Greensmith in a Ford Fiesta R2T. Sindre lost out on the victory by just 11.9 seconds, but having played his ‘Joker’ he left Wales leading the DMACK-backed series. Furuseth’s pace and early commitment to playing his ‘Joker’ won him the first SORT Oil Spirit of the Rally Award at the end of the weekend.

After electing to miss the Circuit of Ireland the Renault driver returned to the series where he left off, fighting for top spot on the Pirelli Carlisle Rally. Although the Norwegian star led going into the first service, he along with Roger Eilertsen sat alongside suffered several setbacks including punctures and the bonnet flying open on stage three, dropping him down to eighth in the category. Undeterred, Furuseth punched in two further stage wins to drag himself into fifth by the close of the event.

Sindre currently sits third in the Junior standings and is eager to become champion at the end of the season but knows it will be a battle royale with Gus Greensmith and yet to play their ‘Jokers’, Mattias Adielsson and championship leader Robert Duggan.

“We have to win the Scottish. We plan to prepare really well and hopefully try and win the event. We got good points in Carlisle but it could have been a lot better. It’s not what we came to the Pirelli wanting to do but we have to look at the bigger picture, there are plenty more rounds to go.

“We can’t use the car back home as the Twingo is based in the UK but we are hoping to do some events in Norway to keep sharp in between rounds. The main thing for us is to do some analysis and work on pacenotes and work on the small details away from the car.”

The BRC strives to be the best national championship in the world and by attracting the current caliber of drivers it underlines the popularity of the series as it helps prepare the stars of tomorrow for the world stage.

“We expected the BRC to be competitive. We have done great in Norway and Sweden so we wanted to test ourselves against the best International drivers and we think the BRC offers that and this was the right step for us.

“A driver has to be good on all surfaces to compete at the top end. If it snows, rains or whatever it doesn’t matter as you have to be the best over everything. As a young driver I am glad we have different surfaces in the BRC and I have learnt a lot already this year. I can’t wait to be back out again as we fight for the title.” 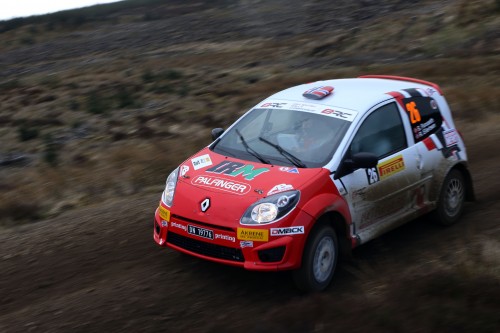