The 2017 Prestone MSA British Rally Championship is set to be one of the most eagerly-anticipated and close-fought seasons in the championship’s history. Not only will it be a battle between crews and marques – adding to the warfare are five tyre manufacturing giants who are all eager to lock horns across the seven-round series.

All classes in Britain’s premier rallying series allow an open tyre choice for 2017, with crews being able to choose between the five registered tyre manufacturers – DMACK, Hankook, Kumho, Michelin and Pirelli.

The BRC is home to some of the most challenging stages in the world, with tough and demanding tests right across the British Isles. Tarmac, gravel, mud and even snow and ice were all present in 2016 with tyre choices playing an important part in the overall strategy in the fight for supremacy. A new challenge in the form of Ypres in northern Belgium will add another dimension to the exciting series, with the first overseas round for the BRC in several decades.

DMACK
Defending BRC1 champion DMACK will be eager to defend its title in 2017. Rather than running its own team, the Carlisle firm has opted to spread its knowledge and support several teams this year in the pursuit of success in all classes.

Hankook
Hankook is the new kid on the BRC block in 2017. Reigning BRC2 Matt Edwards has already signalled his intent by becoming the first to register for the forthcoming season. The Fiesta R5 driver will be out to prove the South Korean marque can mix it with the best in the rallying world.

Kumho
Marty McCormack proved the capabilities of Kumho’s products in 2016 aboard his Skoda Fabia S2000. McCormack has a new Fabia R5 and equipped with the finest products from Kumho, this partnership is expected to be at the sharp end from the start. Kumho also had title success in 2016, with Tony Simpson claiming the BRC4 category crown.

Michelin
Michelin was one of the major forces in last season’s BRC. The French brand notched up seven BRC podiums in the top flight, with Tom Cave and Desi Henry doing the honours in 2016. Cave would go on to finish second in the driver standings behind WRC star Elfyn Evans. Robert Blomberg flew the flag for the French firm in the National Rally Cup, with the Swede taking the title on the Isle of Man in his Michelin-shod Mitsubishi Mirage.

Pirelli
Pirelli enjoyed a fruitful campaign in 2016, with success at all levels in the BRC. The Italian marque took two BRC wins with Josh Moffett on the Tarmac of the Circuit of Ireland, while Fredrik Ahlin reigned supreme on the gravel of the Pirelli Carlisle. Pirelli rubber helped Jonny Greer to claim two podiums on his way to third in the BRC1 standings. Elsewhere, the firm guided Chris Wheeler and Tom Williams to BRC3 and BRC5 titles respectively.

“We are delighted to welcome five massive brands to the BRC in 2017,” enthused Iain Campbell, BRC Championship Manager. “DMACK, Hankook, Kumho, Michelin and Pirelli have all registered to become tyre suppliers this year and will be supporting every round of the series. The level of competition is going to be so high and the level of choice has blown everything wide open, providing another exciting element to the inter-class battles.”

The wait is almost over. The 2017 season is set to blast off in Jedburgh on 17/18 March. Which tyre manufacturer will come out on top on the Border Counties Rally? Only time will tell.

Keep tabs on all the latest BRC developments by visiting www.msabrc.com or following us on social media: MSA British Rally Championship on Facebook, on Twitter and on Instagram using #BRC 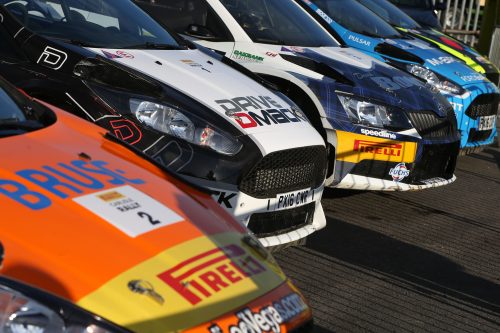