Irishman Keith Cronin and co-driver Mikie Galvin were crowned Prestone MSA British Rally Champions after a gruelling three days of action on the 138.com Rally Isle of Man (14-16 September). Cronin and Galvin in their DMACK-shod Ford Fiesta R5, clinched the championship for M-Sport outside the famous TT Grandstand after taking both round 7 and round 8 victories on the island classic. Cronin won four rounds in 2017 on his way to the title and has now clinched Britain’s premier rallying series for a fourth time – more incredibly in four different cars.

It was Cronin who drew first blood on the first timed test, the picturesque run across the Marine Drive as he and co-driver Mikie Galvin sprinted away to the first round victory, notching up seven fastest stage times from the ten challenging tests. It wasn’t to be plain sailing for the Irish crew as on Stage 7 (Kella) the pair nearly threw it away, riding the Fiesta R5 across a large hedge and grass bank before landing back on the Tarmac.

Pushing him all the way was Edwards and co-driver Darren Garrod in their Hankook-backed Fiesta R5, who had to win both legs to have any chance of becoming champion. The Welsh crew’s championship ambitions were extinguished after Cronin’s victory but a fine second place gave them their third podium of the year and the championship deciding power going into the final round.

Fredrik Ahlin and Torstein Eriksen entered the championship showdown as the crew to beat as the Scandinavians needed a third and a second to claim the title. The Skoda Fabia R5 crew had a difficult first round as they nursed gearbox and differential gremlins. Limping their way to the finish line, the Swedish-Norwegian outfit claimed an all-important third behind Edwards – keeping their title fight well and truly alive.

Cronin had to do the double on Rally Isle of Man to stand any chance of the title and the Irishman attacked from the off but couldn’t live with the initial pace of Edwards. Edwards, who had the same Evo2 upgrade as his Fiesta rival for the first time this season was enjoying his fight at the front and a ding-dong battle enthralled throughout the second leg. Edwards led by 9.1 seconds going into the nail-biting final stage, but multiple champion Cronin set about hauling in Edwards. A masterful drive by Cronin saw him cross the line quicker than Edwards. Cronin won his fourth title and denied Welshman Edwards his first BRC win by 0.1 seconds.

Ahlin needed a second place to secure the title but a spin on cold tyres on the penultimate night stage on Friday evening put paid to his title chances and no matter how quick he drove, the Swedish star was always going to play catch-up and couldn’t close the gap to the front two and lost out on becoming champion by one championship point.

Outside the title fight, two young guns were mixing it at the sharp-end. Rhys Yates and co-diver Andrew Roughead recorded two fourth place finishes – a fantastic end to their second season in the BRC. The Michelin-supported crew in their striking Fiesta R5 put on a fantastic display for the large crowds who lined the stages as they elevated themselves up to fourth in the BRC standings.  Scottish star Alex Laffey and Welsh navigator Patrick Walsh chalked up their first stage win on the spectacular Villa Marina spectator stage in their Pirelli-backed Fiesta R5 on their way to a solid fifth overall on the first round. A puncture and mechanical damage put Laffey out on the final day of the event denying him another fine fifth overall.

The Irish success continued into the Prestone Motorsport News Junior BRC as Callum Devine and Keith Morirty clinched the championship and the £30,000 cash prize – one the biggest prizes in British motorsport.

After a blistering drive on the opening leg to win the first round, Devine shifted the balance of power from rival William Creighton into his own hands ahead of the second round. The Opel ADAM R2 driver had to finish in front of his rival to secure the Junior prize.

Creighton and co-driver Liam Regan (Peugeot 208 R2) had been consistent all season and had never been out of the top four on each round. A fourth place on the opening round then put the pressure on the Irish crew as they had to beat Devine in a straight fight on the final round of the championship. A puncture on the third night stage on Saturday evening resulted in a two and half minute deficit. The fans were sadly denied a front-wheel-drive shootout as Creighton’s eventual fifth was sadly not enough as Devine finished in a comfortable second on the final round of the season.

Norwegian Oscar Solberg, like Matt Edwards in the main category, had to win both legs and hope his rivals faulted for any chance of success. Solberg in a Ford Fiesta R2T with new co-driver Dale Furniss treated the spectators to some flamboyant driving on their way to a third and fourth to put Oscar third in the Junior BRC standings.

As the title fight raged on, Marty Gallagher and Dean O’ Sullivan were out to break their victory duck. A third in Scotland earlier in the year was then backed up with a second on the first Isle of Man round, before Gallagher flew the 208 R2 through the lanes to complete his 2017 podium sweep by claiming the final Junior BRC round victory – the fifth different driver to do so this year.

Tom Williams and Phil Hall returned to the Cadet Cup after selected rounds in the FIA World Rally Championship. The English pairing adapted quickly to the Manx asphalt and after the first round on the island they claimed their first category win. The Harper Adams University team had been working away all season to spray the champagne. Led by James McDiarmid and Max Haines Messenger, the team kept clear of trouble as others faltered to become the fourth different Cadet Cup winner in 2017 in their Ford Fiesta National.

World Champion does the double on Isle of Man

Gee Atherton made a welcome return to the British Rally Championship on the Isle of Man. The Downhill Mountain Bike Champion got his first taste of the Tarmac with his new Ford Fiesta R2T in the BRC4 category and settled into a strong pace from the start, fending off recently crowned BRC4 champions David and Matthew White into second on the opening round. The second was to see the two crews do battle once again but a mechanical retirement from the Whites’ allowed Atherton and co-driver Keaton Williams to take the class double on the island and their third of the season.

John Morrison and Peter Carstairs were the final class winners as their guided their big Mitsubishi Evo 9 through the lanes to take the National Rally Cup wins – the icing on their championship winning cake.

Quotes from the BRC Finale – 138.com Rally Isle of Man

“It’s been a tough year. It didn’t start so well, everything has been thrown at us. This was the toughest event I have ever done and the hardest title to win. Matt and Fredrik drove brilliantly and we didn’t think it was possible. Mikie [Galvin] has done a great job and we have a great team behind us and we kept fighting and fighting and to win the championship by one tenth of second is just unbelievable.”

“Disappointed, very disappointed. It’s been a great battle all year, Congratulations to Keith, he did a great job. It was a tough event for us as the differential and gearbox caused some problems so it wasn’t a clean run. To be beaten by one point is hard.”

“There are no two ways about it. This is my best weekend of my career but its so gutting to miss that win. It’s disappointing as we were close to the pace, if not setting it. On the final stage the car kept cutting in and out, we lost power at the start and right at the finish when we came onto the TT course, it’s a shame we couldn’t pull that last little bit off.”

“It’s unbelievable. It’s something we have been aiming to do and wanted to win for the last few years and its just brilliant, brilliant! The car made every knocking and rubbing sound possible but I held it all together and took it easy on the last stage to bring it home, just can’t believe it.” 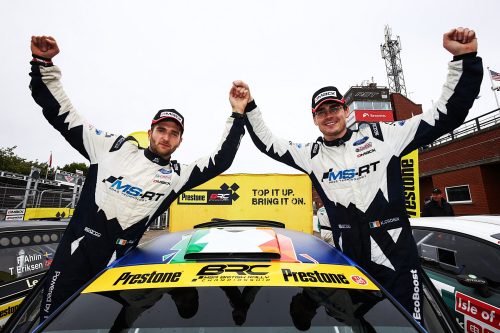