Evans will join forces with another son of a famous rallying father – Finnish sensation Max Vatanen – in DMACK’s two-pronged assault, and will pilot a latest-specification Ford Fiesta R5 in the 2016 BRC, dovetailing his title challenge with his WRC2 duties for M-Sport.

Current DMACK brand ambassador Ari Vatanen and Gwyndaf Evans are both former British Rally Champions – 20 years apart in 1976 and 1996 respectively – and their sons are palpably fired-up as they endeavour to follow in their wheeltracks.

Twenty-seven-year-old Evans rejoins the BRC – a series he last contested in 2012 – buoyed by a breakthrough season in the WRC that saw him claim a brace of podium finishes, including a scene-stealing second place in torrential conditions in Corsica. He is clearly keen to make the most of the opportunity – whilst enjoying himself along the way.

“It’s great to be back in the BRC during a revival year which sees the championship organisers putting so much effort into getting the series back to a high level,” he enthused. “It’s looking like a really exciting championship – proper rallies and proper organisation.

“To start our campaign on my home event at the Mid-Wales Stages will definitely be a special feeling, the Pirelli is back in there, which is a really fast event and the Nicky Grist I did in an R5 in 2013 and quite a few times in an R2.

“It’s also exciting to join the DMACK team alongside Max; we know the R5 is a competitive car and the people involved are very keen to win, so we’re really looking forward to getting out again. Whilst I will be pushing on every rally, the events will additionally provide us with valuable seat time in the Ford Fiesta R5 for our challenge in WRC2.

“At the end of the day, this is an opportunity for me to  really bring the fun back into the sport personally. Some of the most enjoyment I’ve had in my career was driving the R2 to the limit on a lot of the British rallies, so we’re definitely looking forward to enjoying ourselves more than anything this year.”

MSA BRC Manager Iain Campbell is delighted to be welcoming Evans to the reinvigorated championship, arguing that the Welshman will act as an ideal yardstick for the crème de la crème of young rallying talent bidding to battle their way up the ranks.

“It’s absolutely brilliant news that Elfyn is joining the BRC this year in the DMACK British Rally Team,” he remarked. “Fresh from his WRC podium-finishing form, he will provide an aspirational benchmark for all the other BRC competitors and, like his team-mate Max, he will undoubtedly start the season as one of the title favourites.

“The fact that we are able to attract drivers of the calibre of Elfyn and Max is further endorsement of the appeal of the reborn BRC, not only within the UK but further afield too. We’re shaping up for a phenomenally successful and spectacular season, and there are plenty more headline-grabbing announcements to come between now and the opening round.”

The revamped series will take in seven events across the British Isles as it tours England, Northern Ireland, Wales and Scotland before culminating on the iconic lanes of the Isle of Man. Asphalt special stages and gravel tests will see the country’s best drivers in the best cars fight for overall supremacy on the best events.
Keep tabs on all the latest BRC developments by visiting www.msabrc.com or following us on social media: MSA British Rally Championship on Facebook and @MSA_BRC on Twitter using #BRC. 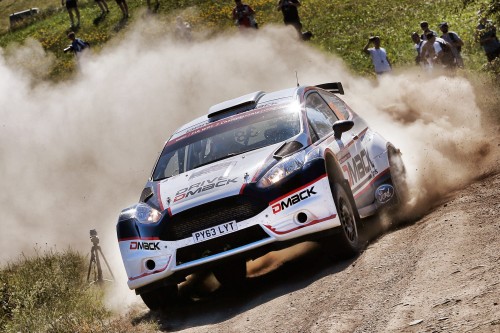