Elfyn Evans currently leads the MSA British Rally Championship for the DMACK British Rally Team – 20 points clear of sparring partner Fredrik Ahlin. As the championship heads back to Wales, we caught up with the WRC star ahead of his second home event.

When Elfyn signed with DMACK to pilot one of the brand new Ford Fiesta R5 Evos at the Autosport Show back in January, the 27-year-old Welshman instantly became the yardstick for which everyone else was to measure their own performance. This year is a showcase for Evans in more ways than one. The Dolgellau driver has been tasked to show the potential of the Ford Fiesta R5 Evo on the world stage but also showcase the latest products from DMACK tyres in a variety of conditions around the British Isles.

‘’The driving has been pretty good for the majority and I have been quite happy with my speed,” explained Evans. “We have had the chance to try lots of new tyres which DMACK have been working on and it has been great to show the progression of the development, to what is now a very competitive product. It has been a nice experience from that perspective.”

Elfyn may be out of a front-line World Rally Championship drive and the spotlight that comes with it but the past seven months has seen a new confident side from the M-Sport driver, a spring in his step if you will. His WRC2 and BRC seat-time and results have certainly helped his stock rise. Elfyn has had the freedom to show his pace and has already taken two wins at world level and two wins in Britain’s premier rallying series.

“I have had a bit of bad luck with the mechanical failure on the Circuit of Ireland and a puncture on the Pirelli Carlisle but it is pleasing to have led every event at some point this year and take two wins.

“The Nicky Grist is an interesting format. I haven’t been to Epynt since 2008 and it will be nice to experience that again. It can be a distracting place with tanks, scenery and what not. It is very fast and there will be a lot of chicanes to control the speed and inevitably with that you have to attack when you can but you also have to be very disciplined as it is easy to make mistakes. You can’t cut with big boulders around and it is important to keep it clean for a good rally.”

Elfyn may have a grasp on the championship with his 20-point lead but the Welshman isn’t getting carried away and knows anything can happen with several rounds to go.

“At the moment it is still early in the championship so we have to take every event as it comes at the minute. There is not enough of a buffer to take it easy and drive slowly around, the fight is still on for the championship and I want to go into every round with the win as the target and that is the best way to enjoy them as well.”

The DMACK driver has one aim for this year, claim two titles and hopefully land a top line WRC drive in 2017 once again. 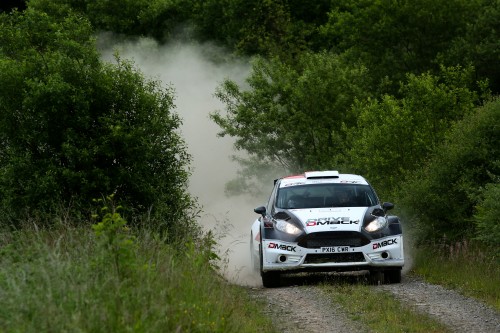