More than 50 registered BRC crews were flagged off from the Hafren Theatre in Newtown for round one of the new-look MSA British Rally Championship this evening. Facing the teams were 26 miles of icy darkness over the iconic stages of Hafren/Sweet Lamb and Pikes Peak/Myherin. As well as the lamp pods and spotlights piercing through the night sky, drivers had to rely heavily upon their co-drivers sitting alongside, feeding them pace notes of the challenges ahead with patches of recent snowfall laying in wait.

In hot pursuit of the top two is Osian Pryce and Dale Furniss in a Mitsubishi Mirage R5 in third, leading the National Rally Cup in the process. The first Skoda Fabia on the leaderboard is David Bogie in fourth with fellow Scotsman Euan Thorburn holds a solid sixth place at the overnight halt in his Peugeot 208 T16. Triple Champion Keith Cronin is the leading Citroen DS3 runner just behind Thorburn after experiencing the most difficult conditions in his rallying career.

2015 Mid Wales Stages winner Jamie Anderson suffered a puncture, losing minutes in the process on the opening test before clawing his way back to sit 35th overnight.

The DMACK British Junior Rally Championship was to see a close encounter between Englishman Gus Greensmith in Ford Fiesta R2T and Norwegian Sindre Furuseth in a Renault Twingo R2. First blood went to Greensmith on stage one before Furuseth fought back on a icy and snowy stage two, more suited to his Scandinavian charger. The gap between the two young chargers sits at a mere eight seconds, setting it up for an exciting second day.

In BRC2 Matt Edwards leads the charge in his Mitsubishi Evo 9, reveling in the tricky conditions to hold eighth overall with several more powerful R5 cars behind him.

BBC Top Gear presenter Chris Harris retired on stage one with electrical problems in BRC 3 while in BRC4 there was a close battle between Tony Simpson and Roger Platt on stage one before Simpson edged clear on the second to out a sizable gap between them.

Quotes from day one

“It’s been a good day, I took no risks on the second stage. It was very difficult to be the first car on the road and to make out where the grip was. The roads looked fine initially and then I started to come into a bit of snow and had some big slides!

“There was a lot of grip in some places, but it took me a while to get that confidence. Happy to be leading, but tomorrow we are really going to go for it and extract more!”

“We were happy on the second stage but the first stage was not good and it was inconsistent and we did not feel comfortable and the rhythm was not there. Even with the snow in that last one I drove a lot better and we were a lot more precise. We are just going to continue tomorrow, we lost a little bit too much to Elfyn in the first one but tomorrow we need to keep the pressure on. I want to be up there with him. I was happy with the second stage and mentally it is good for tomorrow.”

“It was difficult, we got through them and we are happy enough to be honest, just needed to get a bit more heat in the tyres, but we will work on that for tomorrow. The grip levels were horrible and I am still learning the car and with it being slippery as it is, it is very easy to make a mistake. We will certainly up the pace for tomorrow and, if the temperature increases, it should make things easier.”

“We had a steady run on the first stage and we settled in, but it was unbelievably slippery. It was like polished Tarmac and thought is was me driving badly! It was so hard to judge the snow and the shinny bits and I am pleased to be at the end of it. I love the dark, there is something special about it, and there is no other feeling. Same again for tomorrow and looking forward to it!”

“It was very challenging, on the first one. We had a misfire but we had to continue and remain focused and in stage two. We saw plenty of snow and ice and it was difficult to keep a smooth rhythm. I want to stay in front tomorrow and the car is perfect apart from the misfire. We will sort that out and keep pushing hard.”

The Mid Wales Stages action continues with four stages throughout Sunday culminating in a finish at Rally HQ back at the Hafren Theatre in Newtown at 15:00 on Sunday afternoon.

Stay up to date with all the latest BRC news through our social channels, facebook.com/MSABRC and @MSA_BRC on Twitter using #BRC and our website www.msabrc.com. 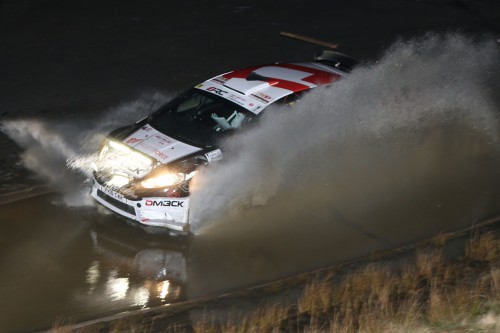