Welshman Meirion Evans comes into the second half of the Prestone MSA British Rally Championship with a point to prove as he goes all out to break into the winners circle on the Nicky Grist Stages.

Evans has enjoyed a strong, mature campaign in the Prestone Motorsport News Junior BRC – claiming two fourths, a third and a second and hopes to claim his first BRC win on home soil this weekend.

Last time out in Belgium, Evans and co-driver Jonathan Jackson endured a tough event during the two-day Ypres Rally. The Peugeot 208 R2 crew went off early on the opening leg but managed to rejoin and keep themselves in the title race.

“We never wanted to give up as we are looking at the championship and any points could be vital,” explained Evans. “The opening day of Ypres was a day where nothing quite went right. The fifth stage summed it up. We hit the ‘famous bump’ where a driveway meets a road and the car rolled onto its side. There was no major damage and we could have carried on but we lost so much time that we wouldn’t have been fighting for a major result.

“We took our time to get the car properly sorted, so we could undertake a serious test on the second day. Much to our surprise, a lot of people suffered their share of drama and to set some good times on the way to fourth was a very good result. To be the quickest Junior on the time sheet on the last stage left us in high spirit after Belgium.”

Meirion currently sits third in the junior standings and has made his ambitions clear ahead of the two-day, two-surface Nicky Grist Stages.

“We have to win at home. That would really put us on the right track for the championship. I would also take good points from the weekend as the competition is so close in the juniors – anything can happen and I think it will go right down to the wire on the Isle of Man.

“On one stage of the the Scottish Rally, eight of us were within ten seconds of each other and the rivalry is intense but we all enjoy it. We have been knocking on the door for a while now and I hope the home advantage will play dividends for me this weekend.”

The fifth round of Britain’s premier rallying series kicks off from Builth Wells High Street on Saturday morning. Crews will tackle a day of classic Welsh gravel stages followed by a day on the Tarmac as the action concludes on the Epynt Military Ranges on Sunday afternoon. 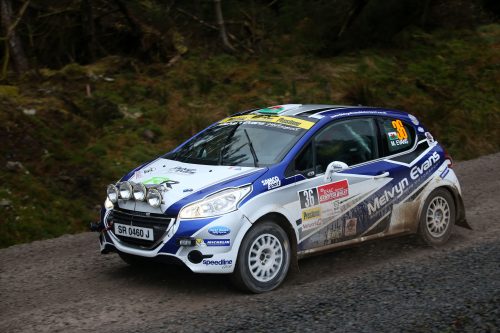