Co-driven by the experienced Jack Morton, the former European Rally Championship Junior driver will go head to head with a plethora of progressive youngsters for the chance to win a drive in a World Rally Championship round in 2023, driving a Hyundai i20 N Rally2 thanks to Hyundai Motorsport Customer Racing.

The Norefjell 365 backed ace has been gaining experience on home soil since 2016, kicking off his motorsport career in the popular Cross Kart formula, competition against the likes of WRC star Oliver Solberg. In 2019, Nore Jr purchased an Opel Adam R2, gaining valuable seat time in front-wheel drive machinery, tackling the Norwegian Rally Championship for two seasons.

Nore Jr would then begin a relationship with the Toksport World Rally Team, campaigning a Renault Clio Rally4 in the ERC in 2021. His results to date include 26th overall on ERC debut in Hungary and taking the fastest two-wheel-drive stage time in a Rally5 Clio. The 2022 season has already started well for Nore Jr, taking ninth overall and a class win on his first outing in the Fiesta Rally4.

Now, he will head to the UK for the very first time to tackle the seven-round Junior BRC series and is looking forward to the challenge of the hotly contested series.

“I`m very excited for this year,” he says.

“The history of the championship is a big pull for me, as is the fact it is somewhere new. I’ve only been to the UK twice and it is going to be a big year for me to change to English pacenotes for the first time but I think I have the right man alongside me for the job; Jack and I will go from strength to strength as the year goes on.“

“We clicked really well in February when we tested together in Norway and all my concerns for the English side have gone away so I’m looking forward to putting everything we’ve learnt into practice this year. It will also be the first time for me in the Ford having been in the Renault last year so I’m very keen to discover this car and once we have a test we will be ready for the first round in Clacton for sure.” 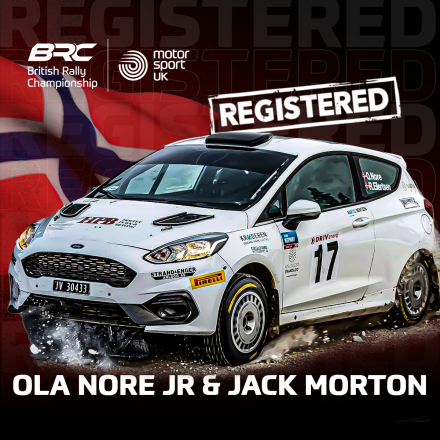