The full entry list for the second round of the Prestone MSA British Rally Championship, the Renties Ypres Rally has been released.

More than 115 cars as well as a healthy historic entry will line-up in the centre of Ypres in just over a weeks time.

M-Sport Ford WRC star Bryan Bouffier will carry number one on the side of his Skoda Fabia R5, while 2017 Ypres Rally winner Kevin Abbring will bring the new Citroen C3 R5 to Belgium at car two.

The top British Rally Championship crew honour this year falls to Keith Cronin and Mikie Galvin in their brand new Hyundai i20 R5 at car three. The Irish pair topped the British teams last season in Flanders and will be eager to take their first BRC win of the season and the first for Hyundai in 2004.

As well as the Tony Pond Award, Cronin will have his eyes on a BRC top five but will have stiff competition from Skoda works driver Ole Christian Veiby at car four, as FIA World Rally Championship points leaders Thierry Neuville and Nicolas Gilsoul will line-up at five in a i20 R5.

With a plethora of exciting Porsche 997 GT3s following our hard charging R5 crews, our first R2 team will be Junior BRC championship leaders Steve Rokland and Tom Woodburn (Car 47). They will be the first front-wheel-drive crew to launch into the Belgian lanes and they will be followed a minute later by James Williams in the Network Q Vauxhall ADAM R2. A further 10 R2 crews in will do battle for supremacy for the Junior Tony Pond Award over the two-day event.

John Morrison and Peter Carstairs bring the big Mitsubishi Evo9 to Belgium for the first time at car 64 in the National Rally Cup while Cadet Cup leaders Jordan Reynolds and Peredur Davies will start at 91.

So ladies and gentleman of Europe. Our 25 BRC points go to… 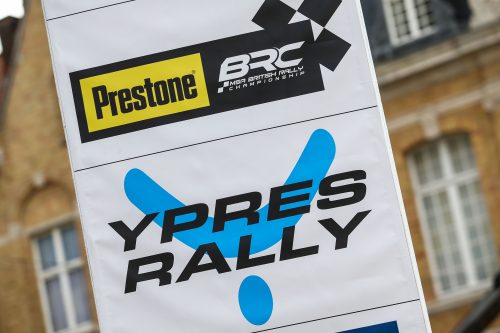