Beatson’s Building Supplies Mull Rally, one of Britain’s most popular motorsport events, is open for business again – with entries available for the history-making Scottish island classic available from Monday August 16.

Cancelled due to the COVID-19 pandemic last year, drivers, co-drivers and teams from around the world are delighted at the news that the lanes of Mull will once more echo to their most distinctive soundtrack from October 8-10.

Last time Beatson’s Building Supplies Mull Rally ran in 2019, all 150 entries sold out in 54 minutes. With that in mind, the organisers have instigated a new entry ballot system where most of the entries will be drawn at random after 48 hours. This eliminates the need to rush to get your entry in and takes pressure off the website mullrally.org.

All entries must be made online.

Clerk of the course Andy Jardine said: “It’s been a long wait, but finally we can say that entries are open for the Beatson’s Building Supplies Mull Rally. Or they will be on Monday…

“We’ve been really fortunate in the past to run with a full entry and a lot of support. Can we expect the same this year? Obviously we’d very much like to think so – the event remains very similar in format to previous years, not much has changed on that front – but these things are very hard to predict.

“The world is a slightly different place to what it was when we last ran the rally in 2019.”

This year’s event includes 148 competitive miles across 17 stages split into three legs. Starting out of Tobermory at 1930 on Friday October 8, the crews go straight into the first of five stages before arriving into an overnight halt at Salen shortly after midnight.

An 1120 restart from Garmony is the precursor to eight more stages through Saturday afternoon, before a five-hour break and a final five-test loop ending with the classic run up Glen Aros and back across the Lochs to a finish  in Tobermory just before two o’clock on Sunday morning.

For the first time, the event is a qualifying round of the British Rally Championship (BRC) – which opens up Britain’s first ever closed-road rally to its premier series.

Jardine added: “It’s great to have the BRC runners with us this year. Some of them have competed at Beatson’s Building Supplies Mull Rally before, of course. But for those who haven’t been up here, we’re hoping it’ll be the first of many trips to the Inner Hebrides for what we still firmly believe to be the best rally in the world.” 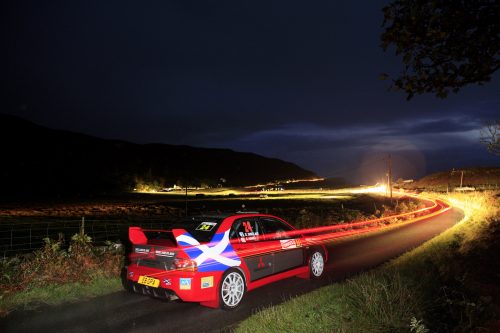