Elfyn Evans and Craig Parry claimed victory on the opening round of the MSA British Rally Championship for the DMACK British Rally Team. The Welsh pairing used their Ford Fiesta R5 to good effect to conquer the competition and conditions. It was not to be plain sailing as they were pushed all the way, after an event long battle with the Scandinavian pairing of Fredrik Ahlin and Morton Erik Abrahamsen in a similar Ford Fiesta R5. The final winning distance was a mere 17.1 seconds between the two young protagonists. Tom Cave and James Morgan finished a fine third overall making it three Fiestas on the podium.

The MSA British Rally Championship got off to a spectacular start in Wales last weekend (5/6 March). The series, which took a year sabbatical, returned with a bang on the opening round, the Mid Wales Stages. More than 50 of the best crews in the best cars launched themselves into six demanding timed gravel stages over the course of the two-day event.

Treacherous icy conditions greeted the competitors on the opening two tests on Saturday evening. The darkness coupled with the tricky road surfaces was a real baptism for the crews as they challenged the grip and pushed as hard as they dared on the gravel and snow covered stages. The first car away was Evans with co-driver Parry sitting alongside. The Welsh pairing have come off the back of two wins in the WRC2 category in the FIA World Rally Championship and are dovetailing the full British series with their WRC commitments in 2016. Landing the first blow, Elfyn took a staggering 18.2 seconds out of the opposition before Fredrik Ahlin stepped up to take a second out of Evans going into the overnight halt.

Ahlin woke up in a confident mood Sunday morning as he reduced Evans’ gap on the opening stage before snatching victory and the outright lead on the second – heading to the midday service with a 3.5 second cushion. An inspired Evans continued the tantalising battle by topping the time sheets on the concluding two tests to overturn Ahlin and win the event by 17.1 seconds. Crews can elect to play their ‘Joker’ on one of the first six rounds which doubles the crew’s points on that event. Having played his on familiar home territory in Wales, Evans has walked away with 50 out of 50 points.

BRC1, the top category for the British Rally Championship saw a real tussle throughout the field with crews swapping positions on the second day. Tom Cave and James Morgan in the Spencer Sport run Ford Fiesta made it three Fiestas on the podium and three different tyre manufacturers in the top three with DMACK, Pirelli and Michelin fighting it out on the iconic stages.

Cave was to not have it his own way as he was pushed hard by the Scottish pairing of David Bogie and Kevin Rae in their striking Skoda Fabia R5. Bogie recorded several top three times, but two spins left him out of touch of Cave, 16 seconds the deficit at the end of the event. Euan Thorburn brought his newly acquired Peugeot 208 T16 across the line in a respectable fifth ahead of Irishman Sam Moffit. BRC2 winner Matt Edwards finished seventh and the DGM Motorsport Citroen DS3 R5 pairing of Jonathan Greer and Keith Cronin ended the weekend together in eighth and ninth respectfully with Desi Henry rounding out the top 10 in his Skoda Fabia R5.

The DMACK Junior BRC was to provide the same level of excitement with three different marques battling it out over the 68-mile event. From the outset Englishman Gus Greensmith with Alex Gelsomino in the navigator’s seat topped the opening stage before Swedish star Sindre Furuseth snatched the lead from Greensmith, overturning an eight second deficit to grab an eight second advantage. The see-saw rivalry continued into the second day with Greensmith in a Ford Fiesta R2T having a good run to the event end, chalking up an 11.9 second advantage. Furuseth in his Renault Twingo R2 leads the championship, though, having played his Joker – as a result he sits five points clear at the top of the championship standings.

Swede Mattias Adielsson led the three-car charge for the Vauxhall Junior Rally Team with a fine third overall in the nimble ADAM while team mates Robert Duggan and Aron Windus finished fifth and seventh respectfully. Josh Cornwell, who finished fourth, also played his Joker in the junior category helping him kick-start his championship with 20 points.

Matt Edwards in his Mitsubishi Evo 9 dominated the BRC2 category and also performed a giant killing act by finishing seventh overall with several more fancied BRC1 cars behind him. Second in the class was Roland Llewellin in a Mitsubishi Evo 10 with Spencer Wilkinson rounding out the BRC2 podium in his Subaru Impreza. Tony Simpson was the lone finisher in BRC4, claiming a respectable 25th overall.

Osian Pryce dominated the National Rally Cup in his Mitsubishi Mirage. The Welshman ended the event over eight minutes in front of Swede Robert Bloomberg in a similar Mirage. Pryce also played his Joker and holds the same advantage as Elfyn Evans with a maximum points haul.

As well as leading the DMACK Junior BRC series, Sindre Furuseth also won the SORT Oil Spirit of the Rally award for his commitment and raw speed on the stages in his Renault Twingo R2.

Quotes from the Mid Wales Stages:

“To have won the first two WRC2 rallies and now here is a great start to the year. I am really pleased to have won – the last event I won outright was in 2011, so it has been a long time coming. The road position was a disadvantage but when conditions improved on the Sunday I was confident I was able to control the situation but Fredrik did have me worried! I pushed as hard as I could in the afternoon and it all came good in the end.”

“I am happy with the result; the win would have been hard. We started the second day seventeen seconds and finished the rally the same again. I am happier with the progress as we showed we were quick throughout. We sadly lost too much time through Hafren on both occasions and unfortunately we couldn’t match Elfyn’s speed. We had no dramas and we proved we have the speed to fight for wins this year.”

“I am really pleased with third, that was strategy coming into the weekend and to finish on the podium is a good start to the championship. It took a bit of time to get going, as we didn’t have much of a chance to go testing before the event. It was a steep learning curve as I had a new co-driver, new car, new tyres and new team, so I tried to hone in slowly. I am very grateful to Spencer Sport, M-Sport and everyone involved, as it was so tight to get the car ready in time after my accident on the Red Kite Rally. A massive thank you to them.”

“I am delighted to have claimed the first win in the series. In the normal gravel stages I felt I had the advantage but on the snow we lost a lot of time last night. I changed my driving style for the snow and that made a huge difference and enabled us to claw back the time despite Sindre being on my tail throughout. By the time the final stage came I had the advantage and I then knew I could drive at a relaxed pace and bring it home for the win.”

“It was a really tricky rally and I think it was harder today compared to last night. We lost time on Hafren as I am not used to the rough conditions and I did not want to risk anything having played the Joker. We couldn’t challenge Gus for the win but I am really happy to finish second and lead the championship.”

“It was a real special rally, we are used to ice and snow but not on gravel tyres! I didn’t want to push too hard too early as I wanted to get used to the new car. When you are not familiar with a car that’s when you make mistakes. Once I found the good set-up, I pushed harder and closed in on the top positions. We are really happy to bring the Vauxhall onto the podium and the team has done a fantastic job and I am really grateful for the opportunity.”

The MSA British Rally Championship (BRC) will return to terrestrial TV screens this year after concluding a deal with Channel 4 and BT Sport to cover the seven-round series. The country’s premier rally championship will have round one highlights this Saturday on both channels.

The next round of the championship will see the crews cross the Irish Sea as they tackle the classic bumpy Tarmac of the Circuit of Ireland Rally (8/9 April). 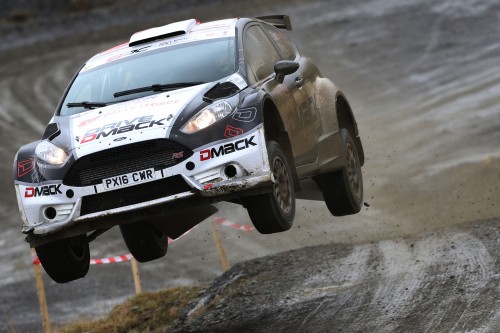