Elfyn Evans is King of Scotland

Elfyn Evans and co-driver Craig Parry are the winners of the RSAC Scottish Rally today (25 June) taking a comprehensive victory on round four of the MSA British Rally Championship. The DMACK British Rally Team driver returned to the top step of the podium for the first time since the opening round in mid Wales. The second win for Evans has elevated him back to the top of the championship table by 20 points, heading sparing partner Fredrik Ahlin who retired on the event.

Rising-star Tom Cave made a heroic last stage push to put his Michelin-backed Fiesta R5 in second with Irishman Desi Henry taking his first BRC podium, making it three tyre manufacturers on the rostrum in his Pirelli-shod Skoda Fabia R5 with a fine third. Local-hero David Bogie held a solid second overall until damage to his Skoda Fabia’s radiator but paid to his weekend on the final stage, denying his home fans the chance to see him on the podium.

The exciting one-day Scottish Rally was to provide a thrilling backdrop for the fourth round of Britain’s premier rallying championship. To the sound of a traditional bagpipe player, crews set off from the Ceremonial Start in the centre of Dumfries – heading into 62 miles of fast and furious forestry action. Classic gravel tests including Castle O’er, Gubhill Rig and Burnfoot provided an exciting day of rallying action with dust being a particular challenge in the morning loop while heavy rain showers made the competitive stages slippery in the afternoon.

Evans in his Ford Fiesta R5 showed his world championship credentials right from the off, taking an 8.8 second lead on Stage One. The World Rally Championship star was on fine form as it was a lead he wasn’t going to relinquish, as he went on to set the fastest time on all seven stages, taking a commanding 52.4 second victory over fellow countryman Tom Cave.

Ever-consistent Welshman Cave continues his 100 per cent finishing record by returning to the podium, a position he has longed for since the Mid Wales Stages. The Spencer Sport driver suffered a lack of power on a number of stages early on and was never able to challenge Evans for victory on the flat-out Scottish stages as a result.
Although holding a comfortable third place going into the final stage, the rising star went on a late charge, digging deep to wrestle runner-up spot off home-grown hero David Bogie. As Cave had played his double-points ‘Joker’ he has moved back into championship contention.

Bogie’s demise meant Irishman Desi Henry (Skoda Fabia R5) recorded his best finish on a British Championship event by chalking up a fine third overall. Henry has shown glimpses of pace on previous events, but on round four it all came together for the while Jonathan Greer mades it three manufacturers in the top four in his Citroen DS3 R5.

David Bogie sported a striking new livery on his Skoda for his local round and the multiple Scottish Rally winner wanted to put on a show in front of the home crowd. With his extensive knowledge the CA1 Sport driver also played his ‘Joker’, but disaster struck on the final stage as the Scottish driver suffered too much damage to his radiator after an incident to make it back to the Ceremonial Finish in the centre of Dumfries.

Bogie’s CA1 Sport teammate Fredrik Ahlin led the series coming into the Scottish and – in the wake of leader Evans – he enjoyed a ding-bong battle over the course of the morning with the Scottish driver. After a slow start, the Swedish star turned up the wick and started to reel in his more experienced teammate, but on stage four he too had to retire, with a broken propshaft the culprit.

The DMACK Junior BRC always sees entertaining action from the under 26-year-olds in front-wheel-drive, pocket-rockets and the Scottish Rally was to be no exception. Norwegian Sindre Furuseth took the early advantage in his Renault Twingo R2 as he flew out of the blocks on the opening picturesque stages.
Furuseth and co-driver Jim Hjerpe were desperate to win their first BRC event after coming close previously. Recording a succession of fastest stage times, the Scottish Rally was to be their rally as the Scandinavian pair took the spoils in Dumfries on Saturday evening.

Irishman Robert Duggan had a nightmare in the early stages of the event. A clutch and gearbox gremlin hampered the Vauxhall ADAM R2 and to remain in the event his Vauxhall Motorsport mechanics had to change a complete gearbox in 30 minutes. It was a feat they triumphantly achieved with minutes to spare allowing Duggan and co-driver Ger Conway to continue in the event and take a solid second, adding lucrative points to their championship campaign.
Vauxhall stablemate Mattias Adielsson took a fine third in the DMACK Junior category. The result shows a return to form for the Swedish sensation as he stood on the podium once again.

Matt Edwards and co-driver Will Rogers took the spoils in BRC2, further extending their championship lead. The duo once again delivered a giant-killing performance in their Mitsubishi Evo 9 which is not too far from a showroom-production model, finishing 11th overall and seventh in BRC, putting more powerful R5 machinery behind them in the process.

Chris Wheeler in his Citroen DS3 R3 played his ‘Joker’ on the Scottish Rally, elevating him in the BRC3 points table – overhauling BBC Top Gear presenter Chris Harris in the process. Tony Simpson bounced back after a troubled Pirelli Carlisle event to take the BRC4 honours. He too played his ‘Joker’ putting him in the pound seats going into the second half of the season. In the BRC National Rally Cup, Robert Blomberg scored his first win of the year and the second for the Mitsubishi Mirage after guest star Osian Pryce won the opening round in Wales.

The winner of the SORT Oil Spirit of the Rally Award was Australian Guy Tyler in the DMACK Junior BRC. Tyler was declared the unanimous winner by the BRC team and SORT Oil for his sheer dedication and commitment to the series. After making the mammoth move from the other side of the world to compete in the series, the young Australian showed great pace, finally recording his first BRC finish with fifth in the Junior series.

Quotes from the RSAC Scottish Rally:

“This win is what we wanted as we have had a lot of bad luck on the last few rounds and we wanted to get on back track in Scotland. I am really happy that we managed to do it and we can go to the next round pretty happy and with confidence as well. It is a shame Fredrik [Ahlin] and David [Bogie] retired the way they did, but fortunately luck has gone our way this time and I look forward to the battle resuming on the Nicky Grist Stages in two weeks time.”

“It has been a really good day and a solid points haul as well is brilliant. We had a couple of issue to be honest but we just had to overcome them and hold the head high to get through it all. Congratulations to Elfyn [Evans] he drove really well again and his pace has helped inspire me, as I want to get as close to him as possible. Things are coming together nicely for us now. Spencer Sport is a young team, things take time to gel and things are starting to work really nicely. I felt the time was right to play the Joker, and the pace helped me make the most of it.”

“It is a privilege to be on the BRC podium. To be standing with Elfyn Evans is quite something – he is a world rally driver, and I am a builder! We have been driving within ourselves and keeping it steady as there were big gaps in front and behind us. The key was not to get punctures and not damage the car. It is great for our championship and we are over the moon! We hope we can carry the form across into the Nicky Grist Stages now.”

“Finally to win a BRC event is amazing. We made a good start and, once we were out in front, I felt comfortable but the Vauxhall boys pushed me hard. I was determined to win and drove flat-put to do it. The Junior BRC is so good as we all push to our limits and it helps us all develop. We are closer to Rob [Duggan] in the standings and it will be interesting to see how the Twingo does on Tarmac. I am hoping this now starts a good run for the championship.”

The full results and championship points can be found at www.msabrc.com 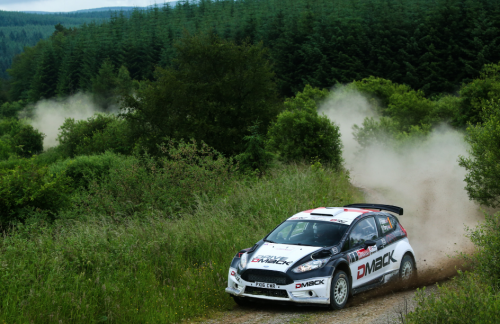