Reigning British Rally Champion Matt Edwards took a step closer to the 2019 title after he and co-driver Patrick Walsh won the BRC section and clinched a creditable second overall on the Today’s Ulster Rally (17 August). The M-Sport pairing didn’t put a foot wrong all weekend in their Pirelli-backed Ford Fiesta R5, as they sealed their third win this season – putting them at the top of the standings by 25 points. WRC stars Craig Breen and Paul Nagle were the only crew quicker than the Welsh pairing all weekend, as the Hyundai i20 R5 crew won the Ulster Rally outright, and with it the Irish Tarmac crown.

Welshman Matt Edwards won the 2018 Ulster Rally and were determined to make it back-to-back victories in Northern Ireland. Edwards came into the event tied on 68 points with season-long sparring partner and fellow countryman Tom Cave. With the pair equally matched, nine demanding Tarmac stages around Newry was to play host to the monumental title fight.

Edwards drew first blood on the opening stage, but it was to be a nip and tuck affair throughout the event. Edwards pushed a 9.8 second gap heading to the first service before Cave came fighting back in his Michelin-shod Hyundai i20 R5, chopping the advantage to 6.6 seconds. Edwards turned up the wick and extended the gap further and further away from Cave. Cave – in an attempt to claw back time had several excursions dropping out of the fight with Edwards. Unfortunately for Cave on the penultimate stage, the Welshman had to retire after an impact with a wall. Both he and co-driver Dale Bowen were okay, but had to sit out the final stage.

With no immediate challenge, Edwards cruised to a near eight-minute victory with he and Patrick Walsh spraying the champagne back in Newry. The title fight may have swung in Edwards’ favour but with both drivers yet to play their joker and with 30 points up for grabs, the championship will be decided on the season finale in Scotland.

“What another great weekend, back-to-back wins and what was really encouraging was the pace to Craig [Breen]. I know he has jumped into a new car this weekend but we were pleased with our overall pace but most importantly we take a lead to the Galloway Hills and that’s our focus now. It’s taken a bit of pressure off as this event was so tricky and had the potential for some big mistakes and the conditions changed so much with every pass so it was hard to keep that performance up over the course of the day. It’s unfortunate that it came to a mistake and gutted for Tom, but that’s the name of game. We look forward to another fight in Scotland next month.”

Despite it being a one-day shoot-out, it was battle of attrition on the bumpy Irish roads. Several local stars arrived into the Ulster eager to make an impact on home soil and upset the title fight.  Marty McCormack, Jonny Greer, Josh Moffett, Alan Carmichael and Desi Henry all came to the Northern Ireland round in high hopes but local hope extinguished stage by stage – with all the home-grown stars being bitten by the local roads.

Edwards’ teammate Alex Laffey was in a positive mood after a breakthrough podium last time out in Ypres. Laffey in his Fiesta R5 was pushing for more of the same but his event came to a grinding halt on stage two as the Scottish driver hit a bank and had to retire with too much damage. Meirion Evans, who is dovetailing a BRC and Irish Tarmac campaign in 2019 switched from a Hyundai to a Skoda Fabia R5 for this round. The Welshman elected to focus on the Irish series this weekend and ran under Irish regulations, thus not making him eligible for BRC points. However, a strong performance saw him take a popular podium in the Irish series with navigator Jonathan Jackson.

Josh McErlean and James Williams fought tooth-and-nail, all event for the Junior BRC top spot, and such was their pace they rounded out the overall BRC podium with Edwards.

Northern Irishman Josh McErlean in his Peugeot 208 R2 was crowned Junior BRC champion on home soil after securing his third Junior BRC win of the season. McErlean from Kilrea has been the class of the field this season and with Keaton Williams expertly guiding alongside, the local star clinched the coveted Junior BRC title and with it a further £2,500 from Peugeot UK and TOTAL – adding to his West Cork and Pirelli glory. To round out a perfect year, McErlean will have to contest the final round to help secure Williams his well-deserved JBRC co-drivers title.

“It’s hard to believe right now and think it will take a while to sink in, but I have to thank everyone behind me, sponsors, family, friends who have looked after us this year. It wasn’t an easy rally and on every stage there was a battle. We really pushed hard in that last loop and unfortunately James had a problem, but that’s rallying, we were in that position last year. I can’t put it all into words!”

McErlean didn’t have it his own way however. After the demise of fellow 208 R2 crew William Creighton and Liam Regan early on, McErlean assumed a lead at the top of the front-wheel-drive category. Ypres winner James Williams with stand-in co-driver Dai Roberts were pumped-up and wanted to mix it with the Irish stars as they also looked to give the new Ford Fiesta R2T success across the Irish Sea.

Williams was taking it to McErlean in the Irishman’s backyard and after a slow start, Williams reeled in Josh – leapfrogging him on stage five to take the lead. With an outside shot at the title, Williams gave it all he could, but on the final loop of stages the Fiesta was down on power – allowing McErlean to scamper away to victory. Nursing the Ford, Williams took second and left wondering what might have been, but importantly the Welshman walked away with top points in the Fiesta Trophy putting him in a strong position in the fight for the 60,000 Euro prize from M-Sport and Pirelli.

Irishman Jordan Hone with co-driver Aileen Kelly made it three different manufacturers in the top three as they threaded the Opel ADAM R2 into third in the JBRC. The crew were delighted with the final result as they sprayed their first bottle of BRC champagne.

BRC new recruit Rupert Flynn and co-driver Peredur Davies clinched the first Cadet Cup win of the season while John Morrison and Peter Carstairs guided their Kumho-supported Mitsubishi Evo 9 to the National Rally Cup win and now have an unassailable point lead in the NRC standings.

The final round the British Rally Championship will be held in Scotland as the Galloway Hills Rally will welcome Britain’s premier rallying series on 14 September, where Matt Edwards and Tom Cave will go head-to-head for the BRC title in a final round showdown. 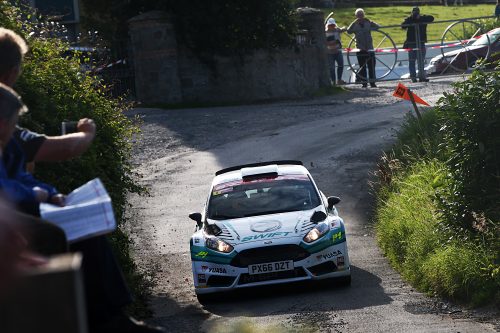