Swift Rally Team star Matt Edwards has today become the first driver to register for the 2017 MSA British Rally Championship, signalling his intent with a full seven-round campaign in the BRC1 category in a Ford Fiesta R5.

The 32-year-old was the first driver to wrap-up a BRC title in 2016, claiming the production based BRC2 category in his Mitsubishi Evo 9 before a switch to the Fiesta R5 for the final two rounds of the year. Learning the four-wheel-drive Fiesta on the Tarmac of Ulster and the Isle of Man was a useful exercise for the north Wales-based driver, earning a hard earned fourth in the BRC section on the Manx event.

The reigning BRC2 champion hopes his recent outings and speedy registration signature will be a sign of good things to come.

“This is completely new for me to be this far advanced in terms of preparation,” enthused Edwards.

“The support from Swift is brilliant and puts together a lot of the jigsaw for a campaign in the BRC. To sign up early shows how far advanced we are compared to 12 months ago when we were only just preparing the shell of the Evo 9! Our hard work, result in Mid Wales and wrapping up the title early sealed the deal for the R5 drive. The plan is to start the year where we ended up – fighting in the mix at the front and giving it my all. I have wanted to do a full year in the top flight for so long and I cannot wait to get going.”

Edwards’ long-term supporter – Swift Group, is delighted to be the first team to officially announce their 2017 plans.

“Swift is delighted to be entering the top class of the BRC and thrilled to be the first to register for the 2017 season,” enthused Nick Page, Group Commercial Director.

“Our involvement in motorsport stretches back over 40 years but this is the first time we have had a dedicated rally team. We are excited to have Matt Edwards and Will Rogers in the car, they have proven pedigree and performed extremely well in the last two BRC rallies of 2016 in Swift’s new Ford Fiesta R5 built by M-Sport. The 2017 BRC season promises to be full of thrills and we look forward to a successful year.”

Championship registration is now open for the 2017 series. Crews can register online at www.msabrc.com or visit the BRC stand at the Autosport Show on any of the four days.

Matt Edwards’ Swift Group liveried cars can be seen at the Autosport Show until Sunday 15th January with the new Ford Fiesta R5 on the Swift Group Ltd stand (6240) and his 2016 BRC2 title winning car on the joint BRC and Wales Rally GB feature display. The Mitsubishi Evo9 is for sale and could quite possibly be the cheapest way to get into the top ten on a BRC round. 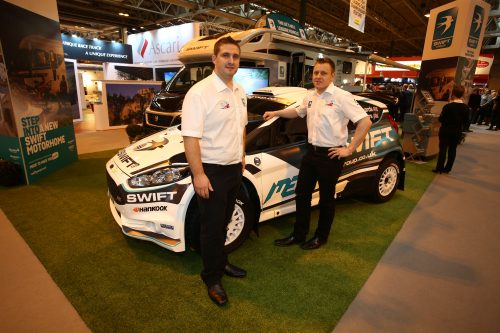