After a scintillating battle with team mate and fellow title protagonist Osian Pryce, Edwards and co-driver Darren Garrod threaded their Pirelli shod Volkswagen Polo GTi through the treacherous lanes around Newry with the ultimate precision.  Trading times throughout the event, the contest would go down to the penultimate stage when an error from Pryce saw him launch his Polo off the road, giving Edwards his third title.

Edwards joins an illustrious list of names on the BRC trophy including the likes of Colin McRae, Richard Burns and Ari Vatanen. But even those iconic drivers could not secure the coveted title three times in a row and the Conwy driver becomes the first driver in history to do just that.

“This means everything to me,” said an emotional Edwards at the final stop line of the season.

“Everyone knows what the BRC means to me. I gave absolutely everything I could today. This thing [the car] has been at all sorts of shapes and we have gone absolutely nuts to try and do the job. Huge thanks to Yuasa and all my supporters who had the faith in me to make it all happen again. Huge credit to Melvyn Evans as well who stuck by me, we could have easily not been here this weekend with all our budget problems after bouncing it off Mull and Cambrian [Rally] hedges.”

“I don’t give up and this is the reward for that”.

Much like the six rounds before it, the Ulster Rally had been a cutthroat affair between the two Melvyn Evans Motorsport contenders with Edwards needing to win to become champion. But Pryce also had his eyes on the prize and was doing everything in his power to not become a BRC runner up for the third time in his career. Sadly his Michelin shod Volkswagen would leave the stage on the eighth test, coming to rest on its roof.

The Melvyn Evans Motorsport squad were also confirmed as British Rally Championship Teams victors, offering some consolation to only one of the two cars returning to the Newry finish.

Taking second place in the BRC would be returnee’s Josh Moffett and Andy Hayes in their Hyundai i20. A largely trouble-free run from the pairing saw them scoop their first BRC podium of the season. Keith Cronin and Mikie Galvin would be another crew to secure a maiden podium of 2021 as they took their Hankook backed Ford Fiesta Rally2 to third place despite a puncture and penalties for a late service check-out.

Round one winners Sam Moffett and Keith Moriarty scooped fourth after overcoming early brake issues. The duo had reverted back to an older specification Fiesta for the weekend and would finish some five minutes ahead of Seb Perez and Gary McElhinney in the M-Sport Fiesta Rally2, taking fifth despite an off on shakedown.

In the Motorsport UK National Rally Championship battle, Garry Jennings and Rory Kenny secured their first win of the season and managed a top-ten finish in the process. Jason Black and Karl Egan were sublime in their Toyota Starlet to take second place against a plethora of four-wheel-drive machinery, finishing ahead of Alan Carmichael and Claire Williams who overcame a broken wheel and several moments in their Hyundai to take third.

Junior British Rally Championship
It would be Eamonn Kelly and Conor Mohan who took an impressive Junior BRC win in the slippery and daunting Ulster lanes but it would not be enough to stop William Creighton and Liam Regan from becoming the 2021 Junior BRC champions.

Creighton managed his pace throughout the day in his Fiesta Rally4 to sit comfortably in second behind an on-form Kelly, knowing full well it would be enough to scoop the prestigious title and the all-important World Rally Championship prize drive in a Hyundai Customer Racing i20 N Rally2. It was no easy task however and Creighton knows only too well what it’s like to be runner up, so was understandably elated at securing the championship on his home round.

“I think that was the longest stage of my life,” said Creighton at the finish.

“I’m so delighted with the result and to finally get the Junior BRC title means so much. We made it quite hard for ourselves this season after not finishing the Nicky Grist so we knew we had to score maximum points on every other round. I’m just so happy to get this result today, I didn’t even want to think about the WRC prize to be honest but now I just want to enjoy this moment, it’s been a long time coming.”

Academy Trophy champions Johnnie Mulholland would round out the Junior BRC podium in third spot after an `enjoyable` day in the lanes just a  few miles from home. Despite not entering into the front running battle, Mulholland was delighted to stand on the rostrum and finish his season in style. 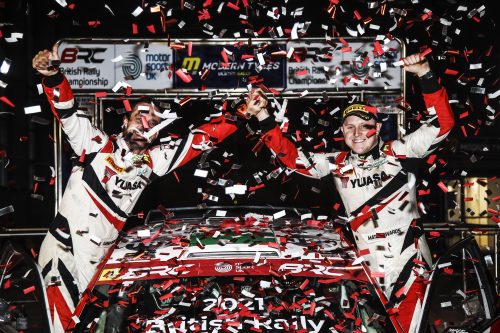