A solid result for two-time British Rally champion Matt Edwards on the Cambrian Rally would have been enough for the Conwy driver to take the battle for a record-breaking third title in a row to the final round of the BRC in Northern Ireland.

But on the fourth stage of his home event, Edwards would find himself teetering on the edge of retirement and his bid in tatters after a compression launched his Melvyn Evans Motorsport Volkswagen Polo GTi R5 off the road on the second pass of Gwydir. The visit into the scenery caused a significant amount of damage to the right-hand front side of the Polo and it was looking like it was game over for the local hero.

Edwards and co-driver Darren Garrod’s plight began on the opening test of the event with a stage time over 10 seconds slower than his teammate and championship rival Osian Pryce. On home soil, that was unheard of for Edwards.

“We had a big confidence knock-in stage one as the car felt so very different to the great test we had in the car just the day before,” said Edwards.

“There was a lot of time loss with several moments and we really had to make something happen in the next two [stages] to limit the damage.”

Edwards duly delivered, going equal fastest with Pryce on the second test before clawing four back on the third. The signs were looking good.

“I was pleased with that” he continues. “Although it was very uncomfortable to be driving that fast with the uncertain feeling we had with the car. It was odd as some sections of the stages felt bang on but when we hit the mud, we really struggled.”

“I knew we had to do something at service so we went to a more open pattern tyre to try and close the gap to Osian because if we didn’t, it wasn’t going to happen otherwise.”

But just three corners in, Edwards would go from BRC title challenger to potentially a BRC runner-up. If Edwards didn’t secure 14 points and having played his bonus points opportunity Joker card, it would be championship over.

“We just hit a bump. It was no different to any other on the previous stages but it just launched us across the road into an earth bank which instantly broke a compression strut. I actually managed to gather it all up and carry on but I knew straight away it was more than just a puncture and had to really slow down and limp through.” 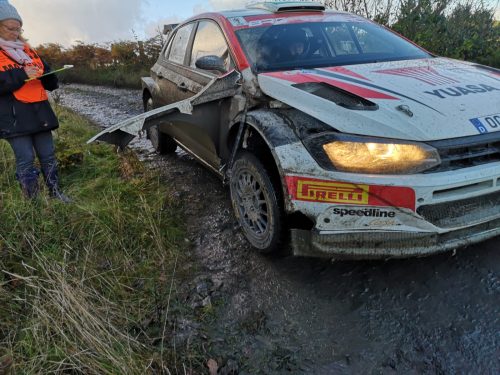 It wasn’t long before Edwards realised things had reached a critical point.

“We got to level ground after the stage to assess the damage and I instantly knew it didn’t look good. The compression strut is there to basically stop the wheel moving back and forth and it had snapped. We had no tools on board to try and brace it back together so we had to think of a way to reduce the movement as under braking the wheel was jamming in the bodywork. We used the spare wheel ratchet strap, wrapped around the track control arm and sump guard brace to try and reduce the movement. We put a new wheel on it  and if felt ok on the road section to Penmachno so we decided to carry on and see how it held up, albeit at  a crawling pace.”

But it wouldn’t be quite that simple for the double champion.

“Unfortunately it didn’t really last more than a couple of miles,” he says.

But with the pending time loss and other BRC hard-chargers climbing the leaderboard, Edwards was on the cusp of tumbling out of contention – his championship over.

“I really just cruised through Penmachno but we knew we couldn’t carry on like it was and pulled up on the road section again.”

“It was a do or die time for us really. I knew I couldn’t lose my head and just got stuck in. Darren and I repositioned the wheel strap which pulled the wheel further forward. We then wrapped the tow rope around the arm and chassis leg but quickly realised we had no means of ratcheting it up so was a bit like a bump stop I guess.”

“Unfortunately we had pulled it too tight and was driving worse so stopped again a mile or so later to readjust the setup. All the while we were conscious of going OTL [over time limit] and we still had to get fuel before Alwen.

Remarkably, there was one shining light in the situation.

“With not having driven competitively, we actually only needed fifteen litres of fuel instead of the forty-five we had scheduled so saved some time there and got to Alwen on our due time which was a light relief”. 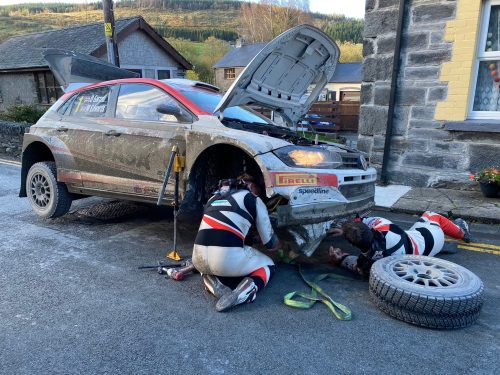 “As a more flowing and smoother stage, we were able to carry a bit more speed but I still couldn’t use the brake pedal to ensure we didn’t overstress the setup up we created. That certainly goes against everything you do as a driver so it was a really tense stage, to be honest. That said,  it was nice and stable when accelerating so we could limit the damage by pushing out the corners and up the straights.”

It wasn’t just the suspension that Edwards had to think about though. Modern Rally2 machinery is designed to be driven at maximum attack so there was a consideration for the engine required too.

“I had to turn the anti-lag system off as well to make sure we didn’t toast the turbo due to the fact we were slowing the car down gradually over a long distance into the slow corners. That would have cooked the turbo so there was a lot going on in my mind that’s for sure.”

“After Alwen we had to re-strap it all up again but with just the tarmac of Twin Lakes to go, we could drive through without stressing the car too much. I still can’t quite believe we made it back to the finish. It was the toughest few hours of my career so far I think. But looking back, I`m really proud of how we dealt with the situation and just kept cool and did what we needed to do”.

Thanks to Edwards’ and Garrod’s quick thinking, mechanical skills and perseverance they can now head to the final round of the season with a shout of the title.

“It’s still all to play for. It’s why I`m here, why I do this. I`d never give up at all, but for a few hours on Saturday, I thought it was all over. Now it’s all about how we can win in Ulster and the focus on that will never waiver.” 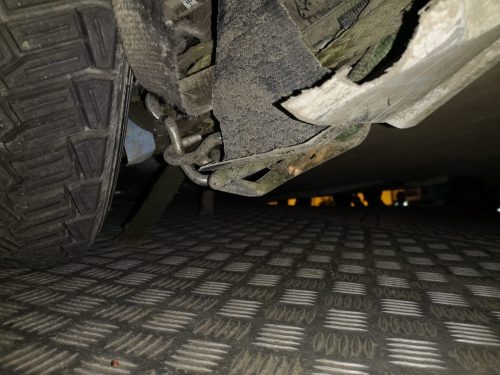 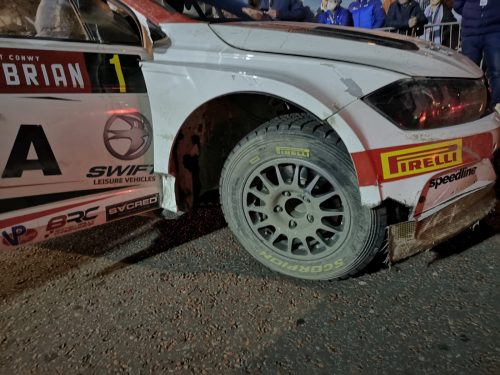