Billed as the ‘Run to the Hills’ the pulsating British Rally Championship season finale was to be set in south Scotland, with the heavyweight title decider a tantalising prospect for the thousands of spectators lining the stages. Matt Edwards came into the showdown only needing a seventh-place finish or better to become the first double champion since Keith Cronin in 2009/2010. Packing his Pirelli-supported Ford Fiesta R5 with a raft of spares, the M-Sport star set-off into the eight-stage event, just looking to finish. Title rival Tom Cave and his co-driver Dale Bowen had to win to bring himself into contention.

Cave and Bowen blitzed the event and won all eight stages in their Michelin-shod Hyundai i20 R5. Cave may have won the battle in Scotland, but Edwards won the war – threading his way through the gravel tests to bring his Fiesta into third overall – enough to seal him his second domestic title.

Jonny Greer was to be reunited with Dai Roberts for the Galloway Hills as usual co-driver Kirsty Riddick, was organising the event. The pair gelled once again and Greer, known for his tarmac prowess pushed his Fiesta R5 hard all day and mixed it in the battle with Cave and Edwards, splitting the championship contenders, and in the process sealed his first podium in the BRC since the Ulster Rally in 2016.

Matt Edwards said:
“I went into the last stage just wanting it to be over and it was a tough event for us to drive, as we had to make sure we got to that finish line. M-Sport, Patrick [Walsh] and the whole team have made it all perfect for me and to have everything come together again is really sweet. I hope Tom [Cave] takes it as a compliment, but to beat him this year is really special and to enjoy this season long fight was great for the championship and to beat him on pace, I am really chuffed. It’s just unbelievable!”

Tom Cave said:
“We had a really good day in the car, clean sweep of stage wins and we came out fighting which is what we had to do to try and win the championship and take the fight to Matt. Congratulations to him and Patrick, but we did all we could today and Dale [Bowen] did a fantastic job. I have had too many bridesmaid moments and naturally we are gutted but to round out the year with a win is a great feeling, especially in some great stages up here in Scotland and it’s been a very enjoyable year!”

Elsewhere, in the Junior BRC, Northern Irishman William Creighton and navigator Liam Regan put an end to their torrid luck and ended their two-year winless streak to chalk-up their first Junior BRC win since the Ulster Rally in 2017. The Peugeot 208 R2 crew had a heart-stopping moment on stage two when a puncture nearly ended their chances. A fight back on the remainder of the six stages netted them the final £2,500 cheque from Peugeot UK and Total and the icing on the cake came for Liam Regan who was crowned the 2019 JBRC co-drivers Champion.

William Creighton said:
“We are delighted as this has been a long time coming, and I am so happy to get the win. That’s what we were going for this weekend, but to get held back with a puncture, we really thought our luck is not going to change. The fightback showed we could do it and this is for Liam [Regan] and the whole team.”

Marty Gallagher and Dean O’ Sullivan drove brilliantly in Scotland for their first time on gravel in the Ford Fiesta R2T and could arguably claim one of the drives of the weekend – pushing Creighton all the way to eventually finish second in the JBRC.

The Scottish pairing of Finlay Retson and Richard Crozier rounded out the podium spoils with the crew delighted to take their second podium of the year and put an end to their run of bad luck.

Englishman Ruairi Bell lifted the 60,000 Euro voucher from M-Sport and Pirelli – his prize for topping the Ford Fiesta R2 Trophy standings. Expertly guided by 2018 British Rally Champion co-driver Darren Garrod, the pair can now use the prize fund to put towards a campaign in the Junior World Rally Championship in 2020.

Ruairi Bell said:
“It’s a bit surreal, it’s just not sunk in. It was a tough event and in fact a tough year, with some tough competition. We had a set goal at the beginning of the season and we managed to achieve it, and those final few stages were pretty nerve-racking but it was brilliant when we finished the final stage.” 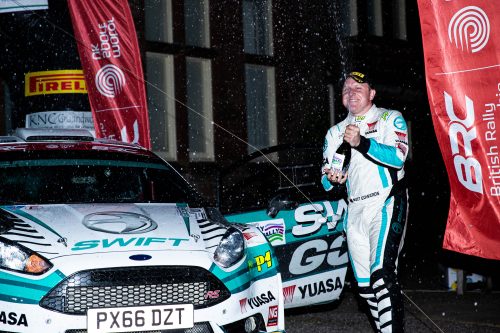