Ever-improving throughout 2017, Edwards took last year’s championship down to the wire. A string of consistently strong results included second places at the Ypres Rally, Nicky Grist Stages and both rounds of the Isle of Man Rally – missing out on victory by a mere 0.1 seconds at the latter.

Finishing the championship in third place, Edwards and co-driver Darren Garrod will be hoping for further improvements in 2018 and have every chance of challenging for the ultimate prize – a British Rally Championship crown.

Swift Group is the UK’s No1 brand for caravans, motorhomes and holiday homes. With a rich rallying heritage, Swift has sponsored Edwards for several years – supporting his development into one of British rallying’s most promising competitors.

This year, the Welshman’s Fiesta R5 will carry the branding of Swift Go – the new motorhome hire business from Swift Group.

“Excitement, anticipation – just two things I’m feeling ahead of 2018. This is a fantastic opportunity and I’d like to thank Swift Group and M-Sport for giving me the perfect platform with which to find that extra performance and push for more.

“We had a great year in 2017 and that’s something I want to build on this season. Consistency is really important, and what kept us in the mix last year. Our Tarmac pace was something of a nice surprise too so if we can keep that up, and be consistent on all surfaces, anything is possible.

“Ideally, I’d like to be in the top-three on the first two gravel events of the year – improving on our sixth and fifth place finishes last year. If we can be somewhere near the front early on, we can build our challenge from there and try to fight for some victories. And if the consistency is there, that should see us in contention for the championship which is of course the ultimate goal.”

“Matt impressed a lot of people last year and it’s great to see him behind the wheel of the Ford Fiesta R5 again in 2018. The Fiesta has claimed the British Rally Championship crown for the past two years running – with Elfyn Evans in 2016 and again with Keith Cronin in 2017 – and I see no reason why that shouldn’t be our goal in 2018.

“Matt works incredibly hard and his dedication matches that of the young team who operate our British Rally Championship programme. He has the speed, but he also has the consistency and that is something that delivers championships time after time. I’m certainly looking forward to seeing how Matt and the Swift Go Rally Team progress as I’m sure is every British rally fan.”

“We’re delighted to be supporting one of British rallying’s brightest talents in Matt Edwards once again in 2018.

“After a hugely successful 2017 season driving the Swift Rally Car, we’re supporting Matt and co-driver Darren Garrod to achieve even more in 2018.

“Swift and the rallying scene have a long and fruitful history, which goes back to the early days of our company and the enthusiasm of our chairman Peter Smith for motorsports.

“There’s also a real synchronicity between our products and motorsport. Competitors need something mobile and comfortable, that can be parked up and provide a home from home while they’re at an event. Our motorhomes are the perfect fit.” 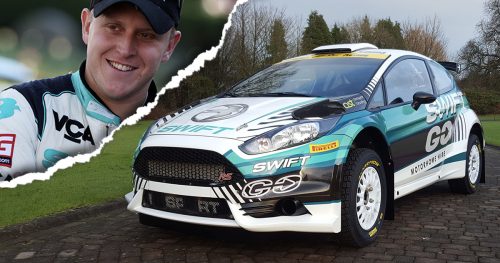