Edwards guns for a BRC hat-trick

The Fiesta has delivered the British Rally Championship for the past four years – with Elfyn Evans in 2016, Keith Cronin in 2017 and Edwards in 2018 and 2019. And this year the Welshman will return in pursuit of a fifth title for the Fiesta – and first for M-Sport’s latest global rally car, the Fiesta R5 MkII.

Well known for their support of British motorsport, Yuasa – one of the world’s largest battery manufacturers and a global leader in quality and innovation – have increased their support to become Edwards’ main sponsor for the 2020 season.

The Fiesta will carry Yuasa’s famous colour scheme – as made popular in the British Touring Car Championship – with flashes red and black on a white base ensuring Edwards looks the part as he chases top results through some of the most iconic stages the UK, Ireland and Belgium have to offer!

Swift Leisure Vehicles – the UK’s largest manufacturer of touring caravans, motorhomes and holiday homes – also continue their support. As do Italian tyre giants Pirelli – and Edwards’ eye-catching 2020 challenger will be displayed on the Pirelli stand throughout this week’s Autosport International Show at Birmingham’s NEC.

The six-event championship gets underway at Edwards’ home event in February – with the Welshman keen to defend last year’s win on the gravel stages of the Visit Conwy Cambrian Rally. Then it’s over to Ireland for some asphalt action at the Clonakilty Park Hotel West Cork Rally, before more asphalt on the only English event at the Corbeau Seats Rally Tendring & Clacton.

The second half of the season starts with a trip to Europe where the crews will battle it out through some of Belgium’s fastest Tarmac lanes at the legendary Renties Ypres Rally, before a trip to Northern Ireland for even more Tarmac at the Today’s Ulster Rally. And the season is brought to a close on gravel, as Scotland’s Armstrong Galloway Hills Rally hosts the finale.

“It’s fantastic to be heading into 2020 with M-Sport again, and I’m also very pleased Yuasa have joined us for this year’s campaign. It’s exciting to be heading into the New Year with the Ford Fiesta R5 MkII – a car I already have some experience of on Tarmac – and I’m confident we can be competitive and fight for a third consecutive title.”

“When you think of British rallying you can’t help but think of some of the biggest names in the sport; and with two titles already in the bag Matt is fast making a name for himself. A third title would bring him just one away from the great Roger Clark, and we plan to give him everything he needs to achieve that goal.

“He delivered two fantastic seasons in 2018 and 2019, and I’m really looking forward to seeing what he can do with the Ford Fiesta R5 MkII this year. The organisers have delivered another great championship with some truly fantastic stages, and Matt has proven performance on all surfaces so I see no reason why the Fiesta can’t deliver a fifth title in 2020.” 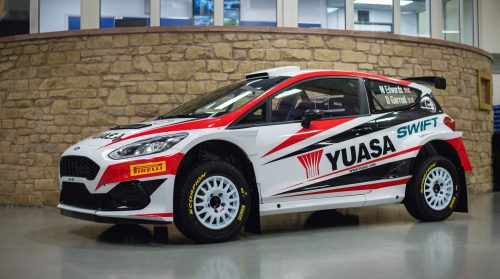