Reigning British Rally Champion Matt Edwards will return to the stages in 2019 to defend his coveted title. Edwards will lead the M-Sport charge in a Ford Fiesta R5 and will be joined in the Swift Group machine by new co-driver Patrick Walsh.

Edwards realised a childhood dream in 2018 when he clinched Britain’s premier rallying series in his own backyard on Wales Rally GB. The Llandudno-based driver had a near perfect season as he secured four out of the five wins in his first season with the Cumbrian firm.

“Even now, I still don’t think it has fully sunk in,” joked Edwards. “It was a long time coming and now it has been achieved, you don’t quite realise what happened. I think it was at the BRC awards and more recently the BTRDA awards evening that it actually hit home. There was a video highlighting my 15-year journey, the cars, the events and it leading to the bigger picture of the BRC win. It’s something I always wanted to achieve. Now I would love to do it again!”

With a championship signed, sealed and delivered, the target will be well and truly on the Welshman’s back coming into the new season. Now one of the established names in the BRC top flight, Edwards has the gloves on and is ready for all comers.

“I am not worried about it… Not because I think it will be easy – it certainly wont be! I’m not worried because I have a title under my belt and have that experience of how to win one and what I have to do. This year I want to be more comfortable with my driving, which will hopefully make me quicker as the pressure of that title over your head isn’t there anymore. I will always do my own thing and focus on my own results, but I am really hungry and motivated to do the double and if anybody wants it from me, they will have to wrestle it from me.”

Ever the perfectionist, Matt has vowed to up his game ahead of the Visit Conwy curtain-raiser… a worrying sign for his rivals.

“I really want to be better on gravel. I know that may sound bizarre, but the round that I will have least experience on will be the Cambrian. I have struggled on wet muddy gravel as I didn’t get much time on the event last year and had problems on Wales Rally GB.”

With the new season kicking off in just a few weeks, Matt is gearing up for quite possibly his biggest challenge to date – his home rally, and the one he would most dearly love to add to his impressive trophy cabinet.

“There is always the pressure of competing at home. I felt it a little bit on Rally GB last year, but the Cambrian will be the big one for me. It’s the event I would dearly love to win. Of course I will always be thinking of the title once again, so I would be happy with a top three to get the year up and running. It’s great to see the Cambrian part of the BRC. I remember when the Vauxhall Rally of Wales came here and it’s great to see the event go back to that sort of scale again. It’s going to be a brilliant event to kick-start a great calendar for the BRC.” 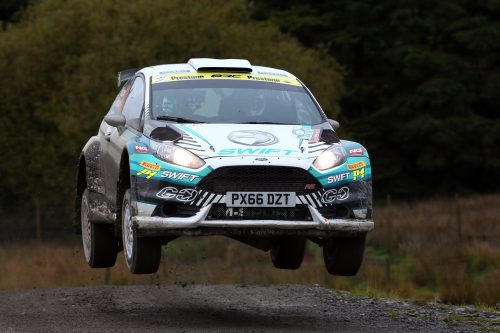