Matt Edwards and co-driver Darren Garrod will head to their home round boosted by their best ever Prestone MSA British Rally Championship result in Belgium and eyeing further success on the Nicky Grist Stages.

The Swift Rally Team star sprayed the champagne after two grueling days on the Tarmac roads around Ypres in northern Belgium. The event for Edwards was only his third event on Tarmac in the powerful Ford Fiesta R5 and north Wales-based Edwards delivered a mature drive to claim second and elevate himself up the championship table in Britain’s premier rallying series.

“The result in Ypres was fantastic and not something we expected from that weekend. We felt good from the start and I had the perfect set-up. The Hankook tyres worked really well – and I was comfortable running at the front running pace. We took three or four fastest stage times and to be only a minute or so behind Keith [Cronin], who is well known for his Tarmac form, is brilliant for us and it shows we weren’t just waiting for others to fall off.”

With the first podium in the bag, the 2016 BRC2 champion travels to Builth Wells full of optimism as he returns to the scene of his championship success.

“The Nicky Grist is challenging and last year was a big learning curve as it was my first time over Epynt. I know the geography and stages well on the gravel from the experience in the Evo9 but I think that is more of a hindrance than help at times. Everything is completely different, my notes and the way you enter the corners as the R5 car is capable of much, much more. The braking, cornering and the lines you can take are so different, so it will take some time to be on the pace. After the result last time out our expectations are now higher but realistically top five would be good and a podium would be great again.”

Matt’s season is gathering momentum. Sixth on the opening round on the Border Counties Rally was backed up by a strong fifth overall on the fast and flowing Pirelli Rally. The only blot in the copybook was a retirement on the Scottish Rally. Overall the 31-year-old can be pleased with his season’s work and is eagerly anticipating the season run in after his second in Ypres.

“I really enjoyed the Manx and Ulster rallies last year as they provide so many challenges. From the road surfaces to the weather conditions, it keeps you on your toes and I really enjoyed driving the Fiesta down the lanes last year. I want to just keep chipping away and now I have a taste of the champagne, I don’t want to go backwards. I want to do it more often.”

With the championship race hotting up nicely, Edwards has moved himself and co-driver Garrod into a strong position as the series enters the second half of the season and hopes to be in the hunt come the Isle of Man.

“I am proud to be mixing it with some incredible drivers who offer a fantastic benchmark in the series and when they go to the WRC, they really show how good the BRC is. A top three at the end of the year would be really nice. We are getting quicker on merit with every round and I think with a good few events we could be there or there about.” 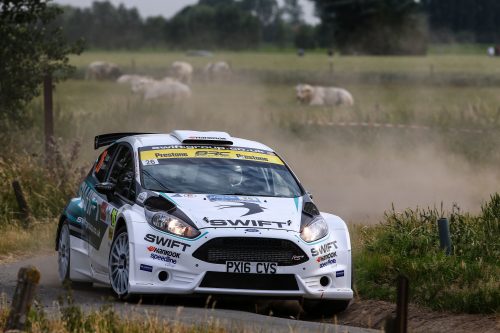