Matt Edwards got his third Motorsport UK British Rally Championship title chase back on track last weekend [24-25 September], winning all but one of the event’s six forests tests to storm to a dominant Trackrod Rally Yorkshire victory.

Edwards and co-driver Darren Garrod took their Pirelli-shod Volkswagen Polo GTi to the impressive victory with over 30 seconds in hand from their chasing teammates Osian Pryce and Noel O’Sullivan in their similar Michelin-backed machine. Matthew Wilson and Stuart Loudon rounded out the top three in their M-Sport Ford Fiesta Rally2, despite being Edwards’ nearest challenger for much of the weekend.

Based at the seaside town of Filey in North Yorkshire, the Trackrod made a return to the BRC calendar for the first time since 2013 and the daunting Dalby Forest would open proceedings with an 11-mile stage under the cover of darkness on Friday night.

The notorious forest complex has claimed many of the world’s best drivers in the past but would also prove to be pivotal in Edwards’ Trackrod assault. He returned a scorching run through the night-time test, to stop the clocks 17.3 seconds faster than both Pryce and Wilson who tied on times.

That impressive form wasn’t just confined to the darkness, with Edwards threading his Polo through the narrow, high-speed tests with precision, topping the timesheets on all but one of Saturday’s five special stages.

In a faultless performance from the Conwy driver which saw him lead from start to finish, Edwards claimed his second BRC victory of the season which takes him into second place in the championship standings and puts down the marker as the only double winner in the series so far in 2021.

“It’s been a brilliant weekend and I`m finding it hard to put it into words really,” said an elated Edwards at the finish.

“We had our backs against the wall coming into this weekend but pulled the rabbit out of the hat when we really needed to. The pressure was on from a championship point of view, but everything literally went to plan, even down the goal of trying to take the lead last night which is what we did and then just consolidated today.”

“It’s been a great team effort and the guys at Melvyn Evans Motorsport have worked really hard on getting the car right after the Grampian. The fight is on for the Mull Rally now, of course, that’s such a different event but those stages in the dark; I`m quite looking forward to that”.

With Edwards off into the distance, the fight for the runner up spot saw Wilson and Pryce embroiled in a scintillating battle all rally long. After the equal time on Friday night, Wilson had the edge for most of the day, but the margin was a slim two seconds heading into the final two stages of the rally.

Pryce retaliated, getting the new rubber on his Volkswagen working perfectly to set a scratch time on the fifth test and taking another three from Wilson on the last, moving him into second place on the very last stage of the rally. His performance at the weekend was also rewarded with the lead of the championship heading into the final three rounds of the year.

Fourth was looking like a lonely place for M-Sport’s Rhys Yates and James Morgan in their Fiesta Rally2. Never quite getting to grips with the Ford on the changeable surface, Yates was on the back foot after a stage one puncture dropped him 20 seconds to the leaders. Yates would then lose four minutes on the fifth test thanks to another flat, which put him well of contention and subsequently out of the championship lead.

Step forward Ollie Mellors and Max Freeman in their newly built Proton Iriz. Another crew to suffer from an opening stage drama with a misfire, Mellors grew his confidence during the day after his Nicky Grist shunt to take his equal best British Championship result in fourth.

James Wilson and Arthur Kierans would also build the confidence as the weekend progressed, taking their Hyundai i20 to fifth BRC and Wilson’s finest BRC performance to date.

Ford Fiesta Rally2 pilot Seb Perez is in his maiden season in the British Rally Championship and has limited experience of both the events in the calendar and the M-Sport Fiesta but did enough to scoop sixth place by the end of the event with Gary McElhinney in the co-driver’s seat. Hankook backed Keith Cronin and Mikie Galvin were embroiled in a battle with Yates, but a late check out of service occurred a two-minute penalty to finish seventh.

The Motorsport UK National Rally Title battle was all set to go the way of Garry Pearson and Niall Burns thanks to an impressive performance over Friday night’s Dalby test. Despite the lack of pre-event recce, Pearson opened an early lead of over 40 seconds behind the wheel of his Skoda Fabia.

Stephen Petch and Michael Wilkinson fought back over the closing stages of Saturday but could afford to ease off over the last test as Pearson suffered dust and turbo issues dropping him to third. Petch scooped his maiden win of the season with Garry Jennings and Rory Kennedy moving into the National fight for the remainder of the year and taking second in the process. Pearson rounded out the podium.

The Junior British Rally Championship battle would prove to be as close as ever for most of the weekend with round one winners William Creighton and Liam Regan taking their second victory of 2021 in their Ford Fiesta Rally4. Creighton was in fine form over the rapid stages to make up for his Nicky Grist disappointment and keep his Junior BRC title hopes alive.

Ruairi Bell and Gareth Parry stopped the clocks one second ahead of Creighton on Friday night but couldn’t live with the Moira driver during the daylight stages, a broken driveshaft forcing them out of contention towards the end.

Championship leader Eamonn Kelly and Conor Mohan continued their fine run of form to take second place and retain the series lead, whilst a superb performance by Jason Dickson and Martin Brady saw the pairing take their maiden Junior podium in third.

In the Academy Trophy, Johnnie Mulholland and Calum Maguire took the spoils in their Fiesta R2T after early leader Fraser Anderson and Jack Bowen ended their rally off the road.

The British Rally Championship will now return to asphalt as the series makes its debut on the island of Mull for the gruelling Beatson’s Building Supplies Mull Rally in just two weeks time. 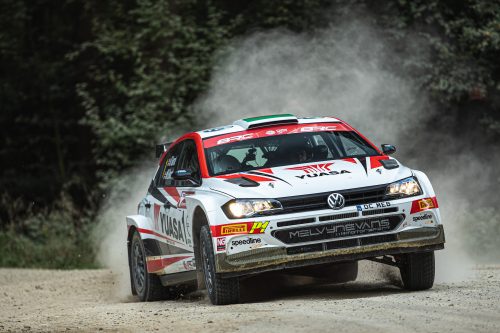