Two-time British Rally Champion Matt Edwards gave himself a significant head start at the Trackrod Rally Yorkshire, by setting a time over 17 seconds faster than his closest rivals on the opening Dalby stage tonight [24th September].

Edwards and co-driver Darren Garrod took full advantage of their number one seeding, to have a clear run through the 11-mile test under the cover of darkness in his Volkwagen Polo GTi.

“[That was] terrifying and awesome at the same time” he said.

“I think we got a fairly good rhythm quite quickly, I think we took the right tyres and I think we carried some decent speed and other than that we did as much as we could”.

He best was more than good enough too, taking a whopping lead over the chasing Osian Pryce/Noel O’Sullivan and Matthew Wilson/Stuart Loudon who stopped the clocks on an equal time, albeit 17.3sec behind the leader. Dust and overshoots the issues for both of the crews in the daunting Dalby test.

Rhys Yates/James Morgan lie third overnight, suffering a puncture in the test and still looking for a “break in the BRC”.

Keith Cronin/Mikie Galvin arrived some twenty minutes late to the stop line of the opener, but still recorded fifth fastest time and 24 seconds shy of Edwards. A missfire before the start of the stage the cause of the delay, but Cronin fixed the issue roadside and made it through before his maximum lateness.

Garry Pearson/Niall Burns didn’t have the benefit of recce in the National Rally Title chase but nevertheless stormed to sixth fastest and leading National crew in their Skoda Fabia R5.

Ollie Mellors/Max Freeman also suffered a missfire in their Proton Iriz, but had an added puncture to contend with to have a 42second gap to the leader in seventh. James Wilson/Arthur Kierans are eighth into day two, adding to a number of crews having overshoots and moments in the gripping night-time test. Seb Perez/Gary McElhinney sit ninth in their Ford Fiesta Rally2 whilst National contender Elliot Payne/Patrick Walsh round out the top ten.

The Junior BRC battle is a much more intense affair with Ruari Bell/Gareth Parry and William Creighton/Liam Regan split by less than a second after the tricky test. Kyle White/Sean Topping are the best of the rest in third, manhandling their aging Peugeot 208 to third, 17 seconds in arrears. Championship leaders Eamonn Kelly/Conor Mohan are third and were tackling Kelly’s maiden night-time stage and understandably are 30 seconds away from the lead time.

Brian Brady/Eamonn Creedon failed to emerge from the test. 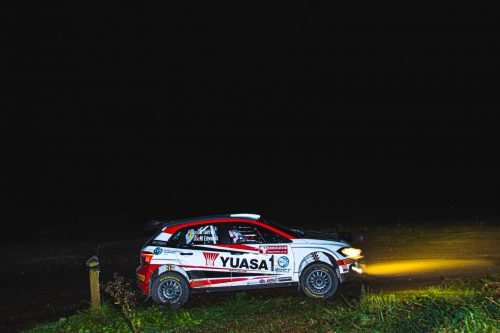