Ford Fiesta R2 driver Eamonn Kelly will contest this year’s Junior British Rally Championship and says he is confident his increasing experience of asphalt, coupled with a car he is rapidly getting to grips with, will stand him in good stead for the coming season. The 21-year old will begin his campaign at the West Cork Rally on March 14/15  – a rally his father, Donagh Kelly, has won five times – and will contest the asphalt rounds at Tendring, Ypres and Ulster, before the Galloway Hills gravel finale. Announcing his plans at the recent Donegal Mini Stages, Kelly praised the Junior BRC as “the benchmark of R2 rallying in both Ireland and Britain.”

Dublin-based Kelly has been a recognised pacesetter in the small-engine classes since making his driving debut in a Class 1 Honda Civic at the Clare Stages in 2017. Having set fastest time on seven out of eight stages that day, the following year he contested six rounds of the Irish National Championship, building experience and, importantly, forming a strong in-car partnership with Motorsport Ireland Academy co-driver Conor Mohan . “My dad’s co-driver, Conor Foley, suggested it would be good to have someone of a similar age alongside me,” says Kelly. “Conor (Mohan) had been navigating for about two years and it was great to gain a regular co-driver who has a similar desire to progress through the sport.”

Kelly switched to a Fiesta R2T at the beginning of 2019, a decision that yielded steadily improved results and culminated in winning the Irish National Championship’s Class 2 crown. “It was a big change to learn left-hand drive, left foot braking, and how to get the most out of the turbo engine all at the same time,” he says. “We had some off-road excursions early on, but things came together steadily. Our increased pace reflected our efforts.”

The Irish pairing are, naturally, excited at the prospect of their first BRC season but, reports Kelly, they have no illusions how competitive the junior series will be: “We competed in West Cork and Ulster last year, so we know how hot the pace is. Each round has its own character and there is a great buzz when you are racing nine or ten other R2 cars over two days. We will take each round as it comes, build speed and aim for consistent results. I know we can do well; it is simply a matter of putting in the work and improving as we go on.”

For the second year, Kelly will have strong backing from Laois Hire and HSS Hire. “Their loyal support has been invaluable, and I really cannot thank them enough,” he says. 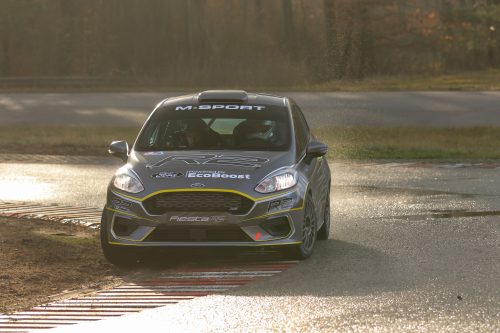