After one of the most dramatic lead battles in recent memory, CA1 Sport’s Fredrik Ahlin/Torstein Eriksen took victory on the Pirelli International Rally (April 29/30), his second Prestone British Rally Championship victory in a row. Spencer Sport’s Osian Pryce/Dale Furniss were a close second after a fraught battle on day two, while Marty McCormack/David Moynihan’s McGeehan Motorsport Skoda Fabia adorned the final spot on the podium.

The Pirelli International is one of the most eagerly anticipated events on the calendar due to the characteristics of the stages; loose gravel through one of the largest man-made forests in Europe always has crews at fever pitch and flat-out at over 100mph.

The event got underway at the Pirelli Factory in Carlisle, where fans were thrilled by motorbike and car demonstrations as well as the Prestone simulator. A popular introduction on the Border Counties Rally means the simulator experience is sure to become a popular fixture at each BRC round with prizes on offer for the fastest person on the bespoke BRC stage.

A drive out to the scenic stages in Kielder got the rally underway, with first blood going to Tom Cave/James Morgan and their Hyundai i20 R5. The car, which competed on an event for the first time at the end of 2016, was making its British Rally Championship debut in the hands of the two Welshman, with James Morgan on the notes.

The duo was also quickest through the second test, before the crews headed to the quaint village of Bellingham for a regroup and autograph signing session, taking some of the world’s most prestigious and exotic rally cars right under the noses of the Kielder locals.

The attention awarded to the new Hyundai did the crew no good though, as on the third stage of the day, Cave and Morgan retired. A suspension breakage was the cause, and the dream of a debut win evaporated. It was a cruel blow to last year’s championship runners-up and the BRC team which had come from Italy to run the car.

Another to suffer early issues was Norwegian ace Eyvind Brynildsen who was delayed with transmission and brake problems and thus – against expectations – never featured on the leaderboard.

Instead, Border Counties (opening round of the 2017 BRC) winner Fredrik Ahlin, from Sweden, was left to inherit the lead, on the birthday of Norwegian co-driver Torstein Eriksen. The lead came gift-wrapped to the duo at the demise of Cave, but they set about extending it and despite an adventurous rear end on their Leo Vegas CA1 Sport Skoda Fabia, the lead overnight was 21s.

Osian Pryce and James Morgan held second overnight, after a tough day aboard their Ford Fiesta R5 run by the Spencer Sport team. The Alphera Hills Ford car ran perfectly, but needed an adjustment to the setup, also struggling to keep the rear of the car in line. Second overnight was a just reward for a clean run.

Rounding out the podium was Keith Cronin and Mikie Galvin in their M-Sport Fiesta R5. The duo suffered steering issues on SS2, before a reset got the car working again. The two-time winner of the event.

After a short service in Carlisle, the crews headed back out for more action in Kielder on Sunday morning for another four stages.

The first stage of the day accounted for a number of crews, including Cronin who rolled his Fiesta. Garry Pearson, making a BRC return and on his first rally since October last year, was going strongly before falling off after a chicane.

The pacesetter of the morning was 2011 BRC champion David Bogie. A brake problem aboard his Skoda Fabia R5 curtailed his efforts and left him well down the order. But some stunning stage times brought him back into contention for a strong points finish in the Oakbank Services car run by CA1 Sport.

However, despite myriad drama, there was another story making the headlines. The lead battle enthralled.

Pryce played his ‘tyre joker’ allowing him the use of two extra tyres for the event, over the ten already permitted. He put them to use by destroying Ahlin’s lead, dropping it from over 20 seconds to just 4.6s with two stages to go. 2014 BRC Pirelli International winner Pryce was on a charge.

But ice-cool Ahlin is never one to shy away from a battle or pressure, and reacted after service by pulling back 10 seconds to lead Pryce by 15.4s heading into the final stage. He topped Pryce again on the final test, as it transpired that Pryce’s handbrake had broken and it was a case of what could have been for the Welshman.

McCormack stole a march on day two to take the podium spot, ahead of David Bogie who showed resilience to fight back from brake problems on Saturday. The Scot took four fastest stage times out of four to show his pace is there when everything comes together.

Matt Edwards gave Hankook its best result since returning to the BRC with fifth, despite he and co-driver Darren Garrod having flu all weekend. Indeed, with Ahlin and Pryce running on DMACK tyres, McCormack giving Kuhmo its first BRC podium since the series was relaunched and Rhys Yates finishing sixth for Michelin, there were four different tyre manufacturers represented in the top six overall finishers.

Meirion Evans had a spin on SS3, costing what he and Jonathan Jackson believed to be 20s, and trailed Creighton by 12.9s at the end of the rally. A bitter blow, but the duo came to Carlisle for a podium and left with what they came for.

In the Production Cup, Spencer Wilkinson and Glyn Thomas took the honours in their Subaru despite an eventful afternoon which included ratchet-strapping the rear wheel to the car after it came loose.

In the National Rally Cup, John Morrison and Peter Carstairs continue to develop in a new Mitsubishi Lancer E9. Despite struggling with hairpins, they took the win ahead of Max Utting on his BRC debut in a Ford Fiest ST. Mike Ainsworth read the notes.

In the Cadet Class, Josh Cornwell/Richrd Bliss survived a heavy challenge from fellow Ford Fiesta R2 duo Fergus Barlow and Max Freeman, before the latter went off the road on Sunday morning.

“Today [Sunday] has been tough, this morning I made a silly, silly mistake at a chicane and I had to reverse two times. 10 seconds goes away quickly when you do that. Stage two was the same as yesterday, the combination of the car and my driving just didn’t work. I regrouped at service and on SS7 we knew this was a good stage for us but also we were struggling with tyres. The tyres are fine but I was too hard on them. That made the balance worse. I feel very sorry for Osian [handbrake broke] I think we could have had a really good battle. We were close too yesterday. That’s rallying. The championship looks good, hopefully we can go to Scotland and repeat this. I know I’m strong on gravel. We’ll get a good pre-event test and go from there.”

“We did the last two stages with no handbrake. So we really struggled in the chicanes and lost a load. This morning we were happy with everything and the car was night and day better than it was yesterday. I’m just a little bit disappointed because we could have really pushed for that first place. That’s just how it is. There’s positives in the pace and this is good points for the championship. It looks like it will be a good battle between Fredrik and I. We’ll come back on the next one and try to be in contention again.”

“I can’t be upset with that. We thought we’d lost it in stage four [with a puncture], and we fell back to fifth. Keith and Garry fell off but we knew it would be a tight fight and we were all in with a chance of the place. I’m happy with the times today, once we get into the first stage and we saw Keith and Garry off I knew I needed to get to the end of the stage and keep it tidy. It’s been a balancing act to push on but also to finish. The pace is good and we’re happy with it, hopefully we get out in a few weeks for another event before the Scottish. I think that’s the key, time in the car. In my test on Wednesday I couldn’t believe how far off the pace I was and how rusty I was. I think that’s key especially given the pace in the BRC.”

“It’s been a long and tough rally and anyone of us could have won. If you would have said to me this would be the result at the start of the weekend I wouldn’t have believed you. Callum, Meirion, a lot of people have had problems. We’ve had a puncture and a slight overshoot and that’s it. Bar that we kept it nice and neat. Callum hasn’t done much gravel either, so for the two of us to be up there fighting for the win is brilliant. It shows what we can do. Looking forward to the Scottish now and getting the last gravel event out of the way before we switch to tar. It’s a long championship and it’ll be interesting to see how it develops.

“We had a puncture on stage seven, then the power steering packed up. Then we got into the last stage and we heard a bang and a rear joint broke. We managed to get out with the wheel hanging off and use a ratchet strap to hold it on. Killer Kielder has struck! I’ve enjoyed it. There’s a point where we thought we wouldn’t get out of the stage but that’s rallying, it’s all part of the challenge.”

“We’re still learning with this car and it’s taken some time but we’re getting there and I’ve enjoyed it. I wasn’t too happy yesterday afternoon as we had some problems with the chicanes. I know the stages of the Scottish so we’re looking forward to the next round. This is only our second event in the car so we’re getting used to it.”

“I took it easy on Sunday morning and we just wanted to make sure we got to the end. We snapped the gear lever in half on Saturday so that’s been a challenge. We had a good battle with Fergus, it was a shame for him to go out. He was well up there. I went off here last year so was a bit cautious but then I went for it! We’ve won by quite a bit and that’s positive again going forward.”

(* = Joker nominations have been played. Rally Isle of Man is a double header with two points scoring opportunities. Every driver to drop one score.) 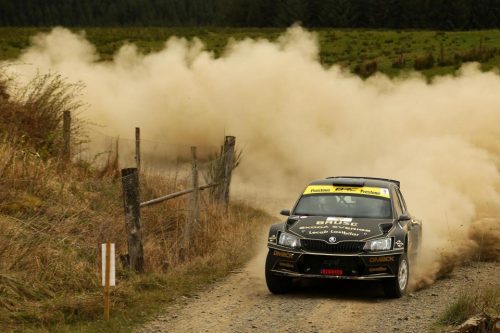