Dossier from DMACK – Thoughts from the 2016 season

The 2016 MSA British Rally Championship is nearly at a close with the season finale on the Isle of Man yet to be played out. We had DMACK British Rally Team manager, Glenn Patterson in the hot-seat to discuss the DMACK Junior BRC and how the Junior series unfolded for the Carlisle-based firm.

Why did you get involved with the Junior BRC?

“The Drive DMACK Fiesta Trophy in the World Championship has been such a success over the last couple of years, and we wanted to look at where we could feed into that from the BRC. There was a lot of hype and positivity coming from the Championship, so not only did we want to be involved at the top level with the R5 cars but we wanted to bring people through from the BRC into the WRC.

“At the same time we were talking with John Pritchard about supporting the Fiesta ST series in the BTRDA, so all of a sudden we now have a ladder from the BTRDA, through the BRC onto the Drive DMACK Trophy and finally WRC2.”

What do you make of the current crop of Junior BRC drivers?

“The standard in 2016 has been so high and it has been positive to see the Junior series attracting drivers from abroad as well. The right format is there and a big enough prize is in place to help pull people from countries that are traditionally gravel or Tarmac bases to then get more experience on their lesser-known surface.

“Firstly, to have had someone like Gus Greensmith compete in the series is not only good for him, as he uses events as a warm-up, but he is a fast benchmark for other competitors to see how quick they are against a world-level driver.

“Every driver has impressed me this year. There are four or five drivers at the top fighting for the wins and drivers quick on Tarmac have been quick on gravel and vice versa. Then there have been drivers with limited experience who have come to the BRC. They have improved round on round and it’s pleasing to see their progress too.”

A lot of drivers have made a big step-up into the BRC how has the DMACK Junior series helped them?

“The BRC has a lot of good events offering every condition possible. The Gravel-Tarmac mix makes it one of the best National series to help young drivers get vital experience. The Scottish was an interesting challenge with its one-day sprint compared to the Circuit of Ireland, which was almost a week in terms of preparation and competition.

“The prize has helped drivers be able to sell the idea of competing in the BRC to sponsors so it is important to have that ‘carrot at the end of the stick’ to help entice more sponsors into the series.

“One of the reasons we got involved was because we like to see drivers progress and we want to support the driver that has battled their way through the year to get to the top and give them a chance to help them move their career forward. We want to congratulate Robert [Duggan] and Gerard [Conway] on claiming the title in 2016 and we look forward to working with them more in the World Series next year.”

How well have the DMACK tyres stood up on the BRC stages?

“We have a really good product for the R2 cars. Our tyres in the Drive DMACK Trophy have been tested on the toughest roads in the world so we know it is a good product and it has certainly faced some challenging conditions in the BRC.

“It is pleasing to see the tyres create some consistency to allow the drivers to do battle on every event. In mid Wales, the crews faced some really tricky conditions and there was a great battle there. Then onto the Tarmac of the Circuit of Ireland, it was surprising to see some of the drivers with gravel experience be able to battle Rob Duggan on home soil. It has been a really competitive and fast-paced championship. It has been a real good tussle this year and we are looking forward to the final round on the Isle of Man.”

The MSA British Rally Rally Championship would like to congratulate DMACK on their title success with Elfyn Evans and co-driver Craig Parry taking the championship with a round to spare. More news is expected from the tyre manufacturer in the coming weeks ahead of the final round. Watch this space! 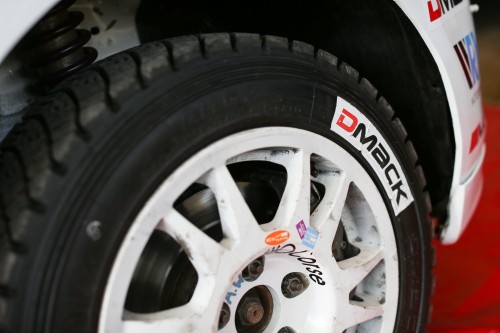