Dominant Williams back to Belgium with a Bang!

James Williams and co-driver Tom Woodburn dominated the Junior BRC section in their brand-new EDSL Sport Ford Fiesta R2T. The pair missed the previous round on the Pirelli but that didn’t deter the duo as they dominated the competition to win the Junior BRC by nearly nine minutes and in the process claimed an impressive 16th overall. It was a textbook drive by Williams and a carbon copy of his 2018 result as he also came out on top as the quickest driver in a front-wheel-drive car across the entire event and in the process gave the new M-Sport built Ford Fiesta R2T one of its biggest wins to date.

Ruiari Bell was battling set-up difficulties in a similar Ford Fiesta R2T but on his first visit to Ypres he was expertly guided by 2018 BRC co-driver champion Darren Garrod. The pair grew in confidence and threaded their way to second overall with Bell picking up his best BRC result to date. William Creighton and Liam Regan showed why you should never up in rallying. After a catalogue of problems over the course of the weekend they battled the heat and put their Peugeot 208 R2 onto the final spot of the podium, picking up a cheque for £2,500 courtesy of Peugeot UK and Total for the first 208 R2 home. Their podium run – now four in a row puts them second in the standings.

Championship leader Josh McErlean and Keaton Williams had a wheel bearing failure on the opening day but came back out on the second to secure fourth and vital points to secure the championship lead heading to the Ulster Rally.

Jordan Hone and Aileen Kelly in the lone Opel ADAM R2 entertained the crowds with their buckaroo jumps on the famous stages. A suffered gearbox mount broke on the first day meaning they had to super rally on the second. Fifth place and a handful of points will put them in a good position ahead of the Ulster Rally – a round they performed rather well on last year!

There was to be massive heartbreak for Bart Lang and Sinclair Young in their Ford Fiesta R2T. The pair in their older specification machine set some impressive times all event and were in line for a podium until the gearbox cried enough on stage 18. Finlay Retson and Richard Crozier were also on for their best result in their latest specification Fiesta until a sizeable off put them out of second place on stage 15.

Jordan Reynolds and Peredur Davies had acquired a new Peugeot 208 R2 after a disappointing start to their season. The young pair were going well – running in the top three for several stages until stage eight the gearbox gave up forcing them into an early retirement.

Marty Gallagher had gone the other way, switching from a 208 R2 to an EDSL Sport run Fiesta. The flamboyant Gallagher took to the new Fiesta like a duck to water as he slotted in behind stablemate Williams for most of the first leg but tragedy struck with the Fiesta going no further on stage 10 with Marty and co-driver Dean O’Sullivan being towed back to service.

James Wilson initially struggled to get up to speed but pushed hard towards the end of the first day to sit second behind Williams. The Irishman suffered heatstroke on the second day and his cause wasn’t helped when hot water from the engine bay exploded into the cockpit. With Arthur Kierans sat alongside, the pair had to stop on stage 17 as they could go no further.

Elsewhere John Morrison and Peter Carstairs in their Mitsubishi Evo 9 not only took honours in the National Rally Cup, they also were the first National specification car home on the event too to round off a perfect Ypres adventure. 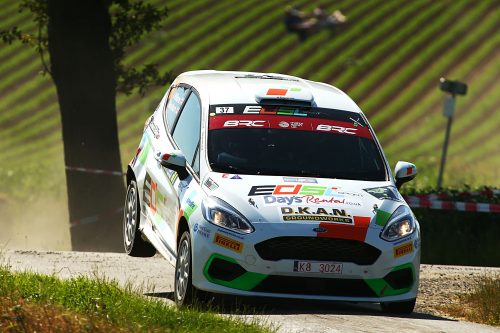