Callum Devine will switch from a MH Motorsport Ford Fiesta R2T to his own Opel ADAM R2 for the upcoming Ypres Rally on 23/24 June. The Irishman currently holds third in the Prestone Motorsport News Junior BRC and is hoping his strong early pace on gravel will springboard him into a good run out on Tarmac.

Devine had limited loose-surface experience before the 2017 season and expected to take time adapting to his weaker surface. A strong start on the Border Counties Rally was dogged by turbo issues, which repeated itself on the Scottish Rally. In determined mood, Callum managed to dig deep and salvage two fifth placed finishes.

Everything clicked on the Pirelli International as he and the Fiesta were at one – fighting for the lead in the fast and furious Kielder forest. Heading into the final loop of stages, Devine’s lack of gravel experience led to him overdriving, wearing his Kumho tyres to the carcass resulting in zero grip on the demanding stages. Second was a fine result, just 0.3 seconds behind the eventual winner.

So how has the early part of the season gone for Callum Devine?

“The pace has been really good on gravel, in fact it’s been surprising,” enthused Devine. “Gravel has never been my strong point but we have learnt quickly. The Fiesta is great on the gravel, with it being a bigger car it feels a lot more surefooted and that helped me learn even quicker.

“We had a bit of bad luck on the Scottish rounds this year with the turbo causing us a few problems but to get some good points on the board is encouraging. To fight for the lead on the Pirelli was another big step forward. The car was great and the tyres worked really well – I just pushed them too hard which meant they didn’t last as long.”

Sitting pretty in third with his Joker still to play, the young-gun has rolled the dice and will wheel out his Opel ADAM R2 for the fast and flowing Belgian roads.

“I know the Opel inside and out after a great season last year and it made sense to use it for Ypres as I think it is the best Tarmac R2 car out there. It’s currently coming to the end of its overhaul as the engine and gearbox came back last Friday and have been rebuilt ready. We will enter Donegal to get some miles in the car as I haven’t been in it since Cork last October and after that we then go straight to Belgium so there is a lot to do in not a lot of time.”

Asked if this was a full time move and Devine made it clear it was in the balance for the Nicky Grist Stages. Two weeks after Ypres.

“I don’t have the gravel kit for the car yet so for the Nicky Grist Stages I could go back to the Fiesta but we will see in the next few weeks. I will definitely use the Opel on the Ulster and Isle of Man as I feel very comfortable in the car on the Tarmac so I think we will be strong on the final two events.”

Looking to the next round first, Callum believes Ypres is fantastic event to host the mid point of the season and his time to shine.

“Ypres is certainly a specialist event and our visit last year will really help. It was a great experience, the stages were challenging and the crowd in the town and spectators on the stages created a great atmosphere. If I can get into a good rhythm I hope to be on the podium come the end of it.”

With the year marching on, Devine feels it’s going to go all the way to the Isle of Man for the Junior title.

“The standard in the Junior BRC is so high and there are a several drivers that can win every round. I want to win it, that’s what we have come for and I think I will have to go all guns blazing to get some points in the next few to be in with a shot at the title come the end of the year.” 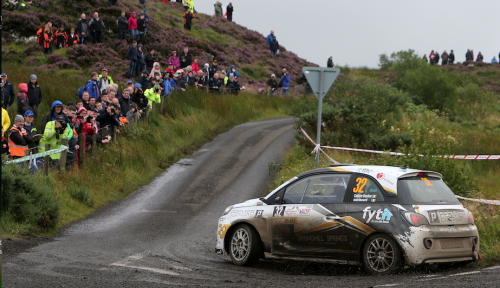