Devine to join Junior BRC in a Ford Fiesta R2T

Irishman Callum Devine will contest the Junior BRC after penning a deal with MH Motorsport to run in a turbo-charged Ford Fiesta R2T with Keith Moriarty calling the notes for the young-gun.

The regaining Irish Tarmac Junior Champion and Celtic 2WD Champion used an Opel ADAM R2 in the BRC4 category in 2016, claiming the class win on home soil last August on the Ulster Rally. The 22-year-old was looking to progress his rallying career and Britain’s premier rallying series was his calling.

“Last year we did the Irish Tarmac Championship and I wanted to progress on gravel and the BRC seemed the natural progression for that. Last year the series looked fantastic and it’s going to be the same again this year and I think it will be even more competitive and I am keen to get at it.”

Devine got his first taste of his new machine at a MH Motorsport group test last week weekend, and the Irish star is raring to go with his new project.

“After my test at the weekend I was very impressed with the Fiesta, it feels like a proper car and feels big and sturdy and very stable. I took a bit of time to get used to a turbo but it’s all learning. MH Motorsport is a good set-up. They are really organised and to have a good test before the first round was a real bonus.”

Callum joins an all-star line-up at MH Motorsport with the Tarmac ace being joined by Oscar Solberg in a sister Ford.

“I think it’s great to have Oscar [Solberg] as a team mate. He is a really nice guy and I hope to get a few tips off him about the gravel and maybe he wants some about Tarmac, or maybe he doesn’t! It will be good to work with someone and compare set-ups and data to drive the team forward.”

Devine may have limited experience on the loose, but Callum has an ace up his sleeve. His asphalt skills are unquestionable and a visit to the infamous Ypres last year will surely be invaluable in his BRC campaign.

“I did Ypres last year in the Opel and had a huge amount of fun. We had a bit of bad luck and got stuck, but we managed to get going again. It’s a real specialist event and I look forward to the fight in the Juniors but it will be interesting to see the guys in BRC1 against the top crews from Belgium.

Ahead of the new year, a relaxed, yet determined Devine was eager to get going and mix it with the other Junior runners and prove his worth.

“I have no experience in a front-wheel-drive turbo car so on the first few rallies we want to go there, get our notes right and put some points on the board. I don’t know where we will be, but I hope to be on the pace when the helmet goes on. When we get to the Tarmac rounds, we are going to give it all we have got.” 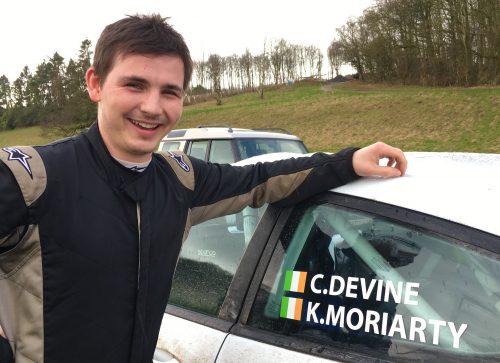