Devine at the double in Prestone Motorsport News Junior BRC

It was a little bit of history repeating on the Nicky Grist Stages as the top three from Ypres recorded the same result in Wales, with Callum Devine and Keith Moriarty (Opel ADAM R2) claiming the Junior BRC win after two action-packed days.

The overall lead changed hands no fewer than six times throughout the event, with the front-wheel drive pocket-rockets entertaining the enthralled Welsh rally fans. Local star Meirion Evans and Jonathan Jackson stole the initial march in their Peugeot 208 R2, before a puncture on stage two saw them tumble down the order. Oscar Solberg/Patrik Barth (Ford Fiesta R2T) subsequently seized the advantage before they too came unstuck, this time with turbo woes. Marty Gallagher/Dean O’Sullivan and Cameron Davies/Michael Gilbey traded times and the lead at the front of the pack in their Peugeot 208s. Davies had almost called time on his rallying career after an accident in Ypres, but together with his team, he performed a herculean effort to get the car ready for his home event. The Welshman led at the overnight halt, just ahead of Gallagher.

Unfortunately, the fairytale would not be concluded on the Nicky Grist as the engine in Davies’ 208 let go at the start of the second day, forcing him out of contention. It was left to countrymen James Williams and Dai Roberts (Fiesta R2T) to uphold Welsh honours as they found themselves embroiled in a five-way scrap for supremacy.

During the fast and furious lead changes at the front, Irishmen Devine and Moriarty bided their time as they got used to the nimble Opel ADAM R2 on gravel. Once onto his preferred surface, Devine pushed on and after snatching the lead on stage 11, he never looked back en route to consecutive wins in the Junior BRC. William Creighton and Liam Regan (Peugeot 208 R2) had a quiet event by their usual high standards and similarly increased their pace on the Tarmac to slip into second, in so doing taking their fourth podium of the year to share the championship lead with the on-form Devine/Moriarty.

James Williams and Dai Roberts took a popular podium as the cars returned to the centre of Builth Wells despite missing both wing mirrors from contact with straw bale chicanes.

Gallagher/O’Sullivan had a solid event and the pace showed by the Irish pair on the gravel was their strongest performance to date and the times on Tarmac enabled them to seal fourth at the finish to move them into the top four in the series in their Peugeot 208 R2. Initial event leaders Meirion Evans and Jonathan Jackson were left wondering what might have been on stage two after the puncture denied them of a much sought after home win. The duo battled on and playing their joker salvaged a respectable fifth to nestle themselves into the top three in the series – still in the hunt for the title as the season heads to the Isle of Man call.

Oscar Solberg and Patrik Barth led the event in their Ford Fiesta R2T but a faulty turbo boost pipe slowed the progress for the Scandinavian pairing as they dropped down the order. The round one winners then wet off on the opening stage over Epynt and that put paid to their difficult weekend. MH Motorsport teammate Josh McErlean with Aaron Johnston sat alongside were making their debut in the front-running Fiesta R2T. The Northern Irish crew felt at home in the turbo-charged pocket-rocket from the off and were mixing it at the front of the junior series. McErlean’s good run sadly came to an end on stage nine and followed more experienced teammate Solberg onto the retirement list. 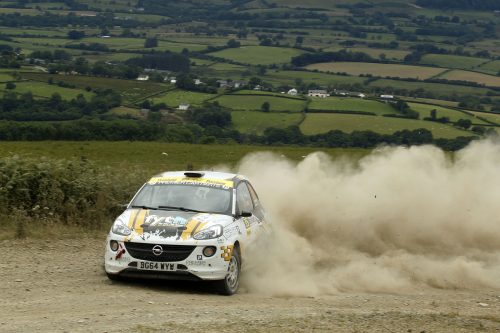