Famed for his giant-killing exploits in a Group N Subaru Impreza, Lampeter rally driver Andy Davies will step into the British Rally Championship for the first time in 2022, after acquiring a Ford Fiesta R5 at the end of last season.

Davies will make his BRC debut at next weekend’s Corbeau Seats Rally Tendring & Clacton along with co-driver Rob Fagg and the pairing will be going head-to-head with an impressive list of BRC1 protagonists for the coveted honour in their GAP Solutions Ltd backed machine.

Beginning his career road rallying in the Welsh lanes in 2019, Davies had enjoyed the perfect grounding in his motorsport career before moving into stage rallying in 2015. Driving a Group N Subaru, he won the BTRDA National Gravel Series N4 class in 2016, along with the ‘Ian Butcher’ Best Newcomer Award on his first full season.

Second overall in the Welsh Rally Championship the following season was a sign of his progression but would elect to go back to his roots and follow a lifelong dream and vie for the Welsh Road Rally Championship title in 2018. With co-driver Michael Gilby in the hot seat, the pairing duly delivered the goods.

A new goal came in 2019 when he headed across the Irish Sea to contest the Irish Tarmac Championship, winning the Group N category and ITRC2 category. His career was paused until progress could be made and the arrival of an R5 Fiesta in 2021 re-ignited his plans.

“I believe the BRC is now the forefront of pace in the UK and Ireland, and that’s what we want to aim for. The coverage and media are very good, which is great for sponsors, and this year’s calendar is cost-effective and appealing for us as a Welsh team. “

Davies knows the calibre of the BRC1 category will be tough to beat, but he has his own set of goals for the season ahead.

“I want to improve as the season progresses. To learn our way around the R5 car, and to finish the season with a top 5 position on an event. The Competition will be extremely tough. But there is no better way to learn than to pitch yourself against the best.” 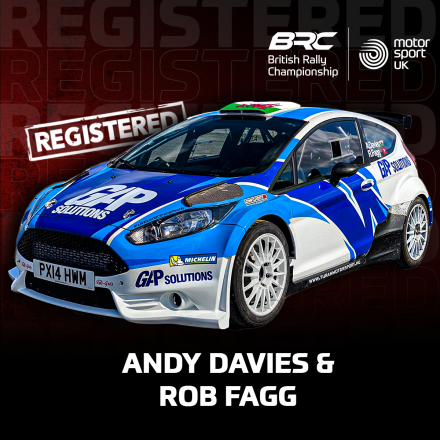