The Prestone Motorsport News Junior BRC unfailingly produces action-packed entertainment on the stages, with the stars of tomorrow fighting tooth-and-nail to be at the top of the pecking order. On the previous round, the winning margin was a mere 0.4 seconds and the Scottish Rally was to provide an equally hard-fought contest.

Round one winners Oscar Solberg and Patrik Barth (Ford Fiesta R2T) led after the opening two stages, with the Scandinavian combination excelling on the wet, rough speed tests until turbo woes forced the Pirelli pair into retirement on Saturday afternoon. Stepping into the breach were Cameron Davies and Caron Tomlinson in their Peugeot 208 R2, following an exciting evening scrap with Solberg and Barth.

The Welsh duo had been dogged by mechanical gremlins on the opening two rounds and were eager to put their problems behind them on the Scottish gravel. Setting some impressive times, Davies would stretch out an advantage of nearly one-and-a-half minutes to take his first BRC win in his debut year – making it three different winners from the opening three events.

Fellow Welsh competitors Meirion Evans and Jonathan Jackson were delighted to finish second in a similar 208 R2, netting their best BRC finish to date. Such was the pace of the top two, the Peugeot drivers also scored points in the overall classification. Rounding out the rostrum were Marty Gallagher and Dean O’Sullivan in another Peugeot 208 R2. The Irish crew had never stepped on the podium previously and were thrilled to spray the champagne after a demanding contest.

Round two winners William Creighton and Liam Regan in their Peugeot 208 R2 suffered their fair share of problems including three punctures on Friday evening. The crew were pleased to get to the finish and pick up 12 points towards their championship hopes. Callum Devine in his MH Motorsport run Ford Fiesta R2T got beaten by Creighton on the previous round and was out to take a win for himself. Punctures also cost the Irishman as well as a similar turbo related issue that dogged teammate Solberg. With repairs made, Devine fought his way back to fifth in the Junior BRC and keeping him within touching distance of the championship summit heading to his preferred Tarmac surface.

After the set-backs for Solberg and Devine, James Williams and Dai Roberts were on course for their first BRC podium in their Ford Fiesta R2T. The Welsh pair had done an excellent job of dodging the rocks and ruts in their Spencer Sport machine. With the afternoon loop left to run, punctures galore struck Williams forcing the BRC rookie down into sixth. With his confidence ever growing, Williams will be in the podium hunt as the year goes on.

Josh McErlean had a difficult start to his first BRC campaign as retirements have dogged the Citroen C2 R2 driver so far this year. The former Junior 1000 champion’s pace has been phenomenal in the older specification Citroen and has been knocking on the door of a good result. Fuel pump problems on the opening stage forced the Northern Irishman out of the running on the first stage. Running under Rally 2, McErlean and navigator Aaron Johnston got their heads down to take their first finish of the year in seventh on the tough and demanding Scottish stages. 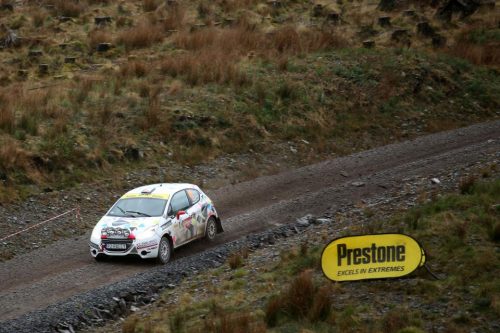