Scotland’s David Bogie, the last driver to be crowned MSA British Rally Champion in a four-wheel drive car, will attempt to repeat that title success when he returns to the series this year in a CA1 Sport-run ŠKODA Fabia R5.

The 28-year old driver from Dumfries became BRC champion in 2011 at the wheel of a Mitsubishi Lancer Evo IX, winning three rounds outright (Rallye Sunseeker, Pirelli International and the Jim Clark) and beating Elfyn Evans to the title by 10 points. The two drivers will go head-to-head once again for the first time in five years, as they aim for the revitalised BRC title in like-for-like latest-spec R5 machinery.

When the BRC adopted a two-wheel drive rally car format, Bogie elected to stick with four-wheel drive and concentrate instead on the Scottish Rally Championship. Having already won the Scottish title in 2009, ’10 and ’11 (becoming the only driver to hold both the British and Scottish rally titles in 2011), he made it five Scottish titles in a row with victory in 2012 (in his Mitsubishi) and in 2013 (in a Ford Focus WRC). Mid-way through 2014 he changed to a Fiesta R5 – winning eight events over the next 18 months (the Scottish Rally National B and Speyside Stages in 2014 and the Border Counties, Rally North Wales, Scottish, Cambrian and Galloway Hills in 2015).

This year, Bogie will campaign a brand new ŠKODA Motorsport-built Fabia R5, which the Carlisle-based CA1 Sport team collect from the factory team’s headquarters in Mladá Boleslav, Czech Republic, during a two day roll-out last week. Bogie will shakedown the car on the Red Kite Stages (21 February), prior to the opening round of the BRC, the Mid Wales Stages (5-6 March).

Bogie said: “I had a very good meeting with ŠKODA Motorsport at Rally Spain last year, and since then we’ve been working on getting a Fabia R5 for the British Rally Championship. I think there will be a lot of Fiesta R5s competing in the BRC this year, so not only did we want to compete in something different, I was very impressed with the build quality of the Fabia R5. The car has proven to be very competitive overseas, and I’m confident it will be just has competitive on the British stages too.

“The year’s BRC is full of very good drivers, but I’m obviously looking forward to competing against Elfyn [Evans] again. He’s impressed me in the World Rally Championship over the last couple of years and I’m sure he’ll be the benchmark in this year’s BRC, but this will be the first time we’ve competed against each other in like-for-like machinery since I beat him to the BRC title in 2011, so we’ll be pushing to win!’’

“I haven’t even sat in a ŠKODA Fabia R5 yet, so getting the car over to the UK and having a good shakedown in the car will be important. We’re unlikely to have more than a one day in the car before just before the opening round of the BRC, but that’s not going to stop us aiming for a very strong start on the Mid Wales Stages.”

Martin Wilkinson, Head of CA1 Sport, said: “We’re delighted to announce our exciting partnership with David, especially as it’s such a vibrant time for everyone involved in rallying throughout the UK at moment with the much anticipated new-look British Rally Championship. David already has his name alongside some of rallying’s biggest stars on the BRC winner’s trophy, and we’ll be doing all we can to help him achieve his goals this year.

“It’s fantastic to have Pirelli, Speedline and Fuchs Oils on board to support our team, because without partners like these it just wouldn’t be possible to compete at the highest level. This year is set to be a really busy one for CA1 Sport, and it’s something the whole team is prepared and ready for. Initially we need to get David as many miles as possible in the new car prior to the Mid Wales Stages, although owing to various time constraints that might only be one day (Red Kite Stages) of pre-season testing – but we will do everything we can to ensure we’re in a position to start the season with a very strong performance.

“Credit must also go to the new team and the individual event organisers behind the new-look BRC, because they’ve obviously made the championship very attractive to a lot of competitors throughout all the classes, and we hope that their hard work is rewarded with great battles on the stages throughout the year.” 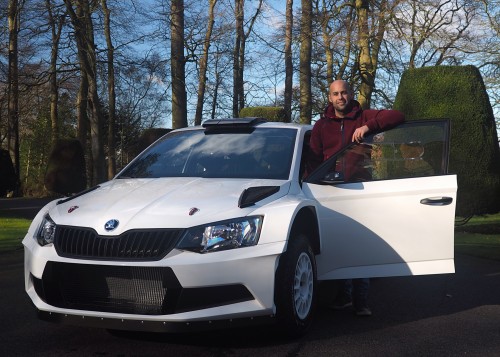