The third round of the 2016 MSA British Rally Championship will see competitors travel to Cumbria for the Pirelli Carlisle Rally next weekend (30 April/1 May). Britain’s premier rallying series returns to the loose as 47 BRC crews grapple with the gravel as they take on the challenging, high-speed and infamous Kielder Forest.

The opening two rounds have seen two different winners take the spoils, with World Championship star Elfyn Evans taking the laurels on the Mid Wales Stages and the highly talented Josh Moffett claiming the top spot on the legendary Circuit of Ireland last time out. The Circuit was a part of the BRC for the first time since 1991 and it certainly lived up to its iconic status. The event was a battle of attrition on the testing Tarmac, with the lead changing hands countless times before the cars reached the Ceremonial Finish in Belfast city centre.

Following their Irish escapades, the teams’ next challenge comes in the form of the Pirelli Carlisle Rally in Cumbria. A return to gravel in the north of England will be another demanding contest with the two-day, 74-mile event taking in the infamous Kielder Forest.

Leading the crews away into the event from the Pirelli tyre factory will be BRC Championship leader Evans in his DMACK-backed Ford Fiesta R5. The Welshman retired from the lead on the Circuit of Ireland and will look to get back to winning ways on the gravel in Cumbria. Hot on his heels will be Sweden’s Fredrik Ahlin, who also retired from the lead on the Circuit in his similar Fiesta R5. Pirelli-backed Ahlin pushed Evans all the way on the opening round in Mid Wales and will want to get his title tilt back on track on his preferred loose surface.

Fredrik’s CA1 Sport team-mate David Bogie will be boosted by his recent podium success last time out as he looks to fight at the front of the pack once again in his Skoda Fabia R5. It is the home round for CA1 Sport and they will be fielding two further cars for Alex Laffey (Fiesta R5) and new recruit Tom Preston (Fabia R5), who will look to gain vital experience on the gruelling stages that lie ahead.

Making a welcome return to the BRC is homegrown hero and WRC exponent Matthew Wilson. The former BRC event winner has not competed in anger since Wales Rally GB in 2014 and he will hope his local knowledge will make up for a lack of recent competitive mileage. In front of Wilson on the road will be the leading Michelin runner, Tom Cave who was hampered by mechanical gremlins across the Irish Sea. Cave will be one to watch in his Fiesta R5 and will certainly be a front-runner once again.

The other leader on the Circuit of Ireland was Northern Irishman Marty McCormack, who led on home soil before a faulty fuel pump put paid to his weekend. The Kumho-shod Skoda Fabia S2000 can never be discounted in McCormack’s hands, and he will look to take his first points of the season on the Pirelli Carlisle.

Winner of round two, Josh Moffett along with brother Sam and former triple BRC champion Keith Cronin have elected to contest an Irish Tarmac Championship round on the same weekend, blowing the battle for the podium places wide open.

Euan Thorburn in the sole Peugeot 208 T16 will be hunting for a podium position while Desi Henry who has impressed in his Skoda Fabia R5 will be looking to chalk up more points to add to his tally. Jonathan Greer took second in his Citroen DS3 R5 on the previous round and with an absent Josh Moffett, he will be eager to leapfrog the Irishman in the points standings after the Pirelli. Neil Simpson rounds out the top ten and he will be seeking a solid finish after two retirements on the opening two tests. Ollie Mellors in the striking SORT Oil-backed Proton Satria S2000 has a spring in his step after taking his first BRC points on the Circuit. All of the above drivers will be running on Pirelli rubber and will hope to bring success to the marque as the Pirelli Carlisle Rally celebrates its 40th anniversary in 2016.

Gravel specialist Jamie Anderson took a fine fifth overall on his first ever Tarmac event in Ireland and will be pressing for a similar result in his Fiesta R5. Rhys Yates was hot on Anderson’s heels last time out and will want to further showcase his potential in a similar Fiesta R5. Rounding out the BRC1 runners will be the highly promising Max Vatanen in the second DMACK-backed Fiesta R5, while James Slaughter will look to gain further gravel experience in another Fiesta R5.

In the fiercely-competitive DMACK Junior BRC, the scrap for the spoils is wide open and a battle royale is set to resume in the forests of Kielder. Winner of the Circuit of Ireland, Robert Duggan in his Vauxhall ADAM R2 sits at the top of the tree, one point clear of Sindre Furuseth. Duggan has his ‘Joker’ still to play while Furuseth has played his and doubled his points in Wales to put his Renault Twingo R2 into the title mix. Winner of the opening round, Gus Greensmith returns for his last outing in the BRC before he tackles the World Championship in his Ford Fiesta R2.

Duggan’s team-mate Mattias Adielsson took the fight to the Irishman in a similar ADAM R2 earlier this month. The Swede scored a third in Wales, second in Northern Ireland and now he wants to complete his set on the Pirelli Carlisle. The third ADAM R2 is in the hands of Australian Arron Windus, who returns to his preferred gravel surface.

Adam Bustard played his Joker in Ireland to bring him back into the hunt as he just pipped Nabila Tejpar to the final podium position. Tejpar is growing with confidence round by round, and she will be looking for more points in Cumbria as will Josh Cornwell, who had a disappointing weekend by his high standards on the Circuit.

Blair Brown and Umberto Accornero will be hoping to move up the table while Meirion Evans, Rhys Pinter, Nick Carr and Guy Tyler will all hope to kick-start their championship aspirations into life on the high-speed event.

In the BRC2 category, Matt Edwards in his Mitsubishi Evo 9 has a hold on the championship standings after a win in Wales and a podium in Ireland. He returns to the gravel full of optimism as he looks to stretch his lead. Circuit of Ireland winner Patrick O’ Brien is absent from Carlisle, while Spencer Wilkinson missed the Circuit and will want to climb the leaderboard in his Subaru Impreza. Roland Llewellin suffered a large accident on the Somerset Stages a few weeks ago and his Mitsubishi Evo 10 is not quite ready for the third BRC round.

In BRC3, Chris Wheeler makes his debut in a Citroen DS3 R3, while Tony Simspon is keen to make hay while the sun shines by consolidating his championship lead over the absent Marty Gallagher and Callum Devine. The Liverpudlian won’t have it his own way as Roger Platt also returns to the series in a Ford Fiesta R2. Tom Williams will become the first competitor in BRC5 and will look to giant-kill in his Ford Fiesta R1.

In the BRC National Rally Cup, Donnie Macdonald in his Mitsubishi Evo 9 took a maximum 50 points on the Circuit after playing his ‘Joker’. The Scottish driver will be after another win and will once again do battle with Jamie Jukes and Robert Bloomberg, both in Mitsubishi Mirages. Lee Hastings in his Subaru Impreza will be in the hunt for another podium in Cumbria.

BRC Championship Manager Iain Campbell is looking forward to the immense spectacle that is set to take place next weekend.

“To have two different winners from two events in every class shows just how competitive the MSA British Rally Championship is,” he enthused. “The iconic Circuit of Ireland returned to the calendar this year and it certainly lived up to its legendary status. To have the lead in the BRC change numerous times and be held by four different drivers sent the excitement into fever pitch. No fewer than six different drivers held the final podium position in the DMACK Junior BRC as well, which is just astonishing.

“The Pirelli Carlisle Rally will see our crews return to the gravel of Kielder Forest. As well as a fight between the drivers, there will be a big battle for supremacy between the tyre manufacturers. DMACK, Kumho and Michelin will all want to win on Pirelli’s home patch and all four firms will give all they can to get their cars across the line first. The pace is going to be fast and furious throughout the field and the weekend is going to be just as unpredictable and will add yet another exciting chapter to this rollercoaster of a season.” 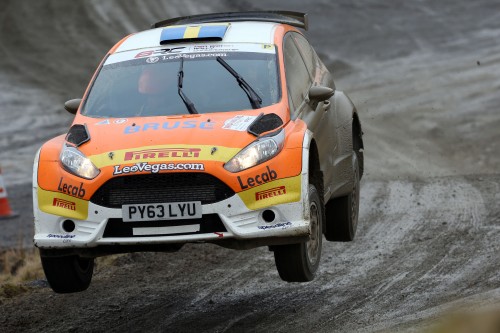