The action-packed Prestone MSA British Rally Championship returns to action next weekend (29-30 April), with the famous Pirelli international Rally playing host to the second round of Britain’s premier rallying series. The legendary Kielder Forests await with over 100 gravel miles for the BRC elite.

The 2017 campaign exploded back onto the scene in Scotland for round one of the BRC. The Brick & Steel Border Counties Rally got proceedings underway in dramatic fashion, with six drivers topping the timesheets throughout the weekend and the lead of the rally changing no fewer than five times during the two-day event.

Big-hitters set to do battle in Cumbria

After a commanding victory on the opening round, Fredrik Ahlin comes to the Pirelli International Rally in fine form in his DMACK-shod Skoda Fabia R5. The Swedish driver won the event last year and will be eager to stretch his standings lead further after his visit to Kielder with new co-driver Torstein Eriksen. Leading the charge to overhaul the Swedish/Norwegian pairing will be Tom Cave and James Morgan in their brand new Hyundai i20 R5. The Welsh pair will debut the Korean machine on British soil and will hope that Eastern promise will prevail, as they look to snatch their first Pirelli win and the championship lead.

Previous winners Osian Pryce/Dale Furniss (Ford Fiesta R5) will be in the podium hunt once again after a fine third place in Jedburgh. The most successful man in recent Pirelli Rally history is Irishman Keith Cronin, who already has two wins chalked against his name. With Mikie Galvin calling the notes, the Fiesta R5 driver will be keen to make it a hat-trick on M-Sport’s home ground. Team-mates Alex Laffey and Dai Roberts will be wanting to put a disappointing round one crash behind them, as they go in search of their first points this year.

Another former Pirelli Rally-winning crew, David Bogie and Kevin Rae were trading times at the top with team-mates Ahlin/Eriksen until a rare off for the Scottish pair put the Fabia R5 crew out of contention. Having scored no points with their ‘Joker’ last time out, the duo will be hungry for a win to put their title tilt back on-track. Fellow CA1 Sport crew, Jamie Anderson and Ross Whittock put their new Fiesta R5 through its paces on the Borders and will be eager to put themselves into the top six once again on their preferred gravel surface.

The biggest surprise in the build-up to the second round of the BRC was the announcement that WRC regular, Eyvind Brynildsen would be joining the fray. The Norwegian, backed by Pirelli brings his Fiesta R5 to the party and will be hoping to put the cat amongst the pigeons with his wildcard entry with co-driver Andreas Fredriksson.

Young gun Rhys Yates showed incredible form in Scotland to round out the top five at the opener. Alongside Carl Williamson, the Michelin-supported Fiesta R5 driver will hope to replicate that result as the cars return to Carlisle this weekend. Matt Edwards/Darren Garrod had a troubled first round but were pleased to take home sixth in their Hankook-shod Fiesta R5. With Edwards’ confidence ever growing, the Welshman will be challenging for a strong result.

Marty McCormack/David Moynihan showed flashes of brilliance on the opening round in the their Kumho-backed Fabia R5. The northern Irishman took a stage win on the Border Counties and will look to convert his raw speed into a points paying position.

Jonny Greer is one of the most experienced on the Pirelli International with the Northern Irishman set to start his eighth event, this time at the wheel of his Citroen DS3 R5 with Kirsty Riddick on the notes. Desi Henry/Liam Moynihan in a Fabia R5 will be aiming to fight inside the top five as they look to put a disappointing first round behind them.

Rejoining the series and kicking off his 2017 season on the Pirelli Rally is Thomas Preston in his striking Fabia R5. The Englishman got quicker with every stage mile in 2016 and will be hoping to burst into the points from the off this weekend, with the experienced Andrew Roughead calling the notes.

James Slaughter makes a welcome return in his striking Fiesta R5. The Kent-based driver has a new co-driver onboard in the form of Niall Burns. Slaughter is gaining experience with every mile and hopes to secure his first outright point on the Pirelli.

With a £30,000 prize fund on offer to the overall champion, the fight for supremacy in the Prestone Motorsport News Junior BRC is hotter than ever in 2017.

The scene-stealing performance on round one went to Oscar Solberg and Patrik Barth in their Ford Fiesta R2T. The Norwegian/Swedish pairing blazed a trail through Jedburgh to put the famous Solberg name at the top of the championship standings going into the Pirelli Rally.

Although a relative newcomer to gravel, Northern Irishman William Creighton stunned everyone with a fine third in his 208 R2, with Liam Regan expertly guiding.

Peugeot are well-represented in the Junior category this year, with five of the French pocket rockets lining up for the Pirelli Rally. Meirion Evans/Jonathan Jackson scored a strong fourth in Jedburgh and will be aiming for the top three on the fast, flowing stages. Fellow Welsh pairing Cameron Davies/Caron Tomlinson had a nightmare of a first round and will be eager to seal a solid result next time out – as will Irish crew Marty Gallagher/Dean O’Sullivan in the final Peugeot 208 R2.

Celtic two-wheel-drive champions Callum Devine/Keith Moriarty came fifth on their first gravel event in their Fiesta R2T. The Irish pair are gaining momentum and are sure to be fighting at the sharp end once again. Another Fiesta R2T will be in the hands of James Williams/Dale Bowen, who will be hoping to score their first points of the season in the competitive front-wheel-drive series.

Josh McErlean/Damien Duffin showed flashes of brilliance in their Citroen C2 R2 before mechanical failure put paid to their opening round. The Irish crew have points on the agenda for the demanding Pirelli Rally.

New for 2017 is the exciting formation of the Cadet Cup, home to the Ford Fiesta National, Opel ADAM Cup and older-generation Ford Fiesta R2.

Signalling his intent on round one was Josh Cornwell, with Richard Bliss in the co-driver’s seat in their Ford Fiesta R2. The pair dominated the first round, getting their season off to a textbook start.

Fergus Barlow and Max Freeman (Fiesta R2) notched up second and will be in the hunt for another podium to add to their collection. James McDiarmid and Max Haines Messenger fly the flag for Harper Adams University in a Ford Fiesta National. The team of enthusiastic students took the final step of the podium in Scotland and will hope to bring their turbocharged machine to the finish once again.

Challenging the top three will be a brace of MH Motorsport-prepared Ford Fiesta R2s for Nabila Tejpar/Charley Sayer-Payne and Alex Waterman/Harry Thomas, while Richard Burns’ godson, Tom Williams will be challenging for a rostrum in his Fiesta R2, with Bryan Hull on the notes.

Arron Windus is set to return to the series on the Pirelli in a brand new Vauxhall ADAM Cup. The Australian will be keen to get his series off to a flyer, by bagging a Cadet Class podium on the second round of the BRC.

The supporting cast out to steal the headlines

Following an outing in the FIA World Rally Championship, David White will hope more seat time in the Ford Fiesta R2 in Corsica will pay dividends in the fight for BRC4 honours.

Donnie Macdonald and Andrew Falconer will once again harness the powerful right-hand-drive Ford Fiesta R5 in the National Rally Cup. The Scottish duo will be hoping to top the NRC points standings and mix it in the top ten overall on the Pirelli International. John Morrison and Peter Carstairs in a Mitsubishi Evo9 will be waiting to pounce if Macdonald slips, while Spencer Wilkinson and Glyn Thomas aim to extend their margin in the BRC Production Cup.

The full entry list will be available early next week via www.msabrc.com andwww.pirelliinternationalrally.co.uk.

All seven rounds of the BRC will be beamed into homes around Europe with Channel 4, BT Sport and Motorsport TV all showcasing the best of the action with extensive highlights being transmitted after every weekend.

Keep tabs on all the latest BRC developments by visiting www.msabrc.com or following us on social media: Prestone MSA British Rally Championship on Facebook and @MSA_BRC on Twitter using #BRC 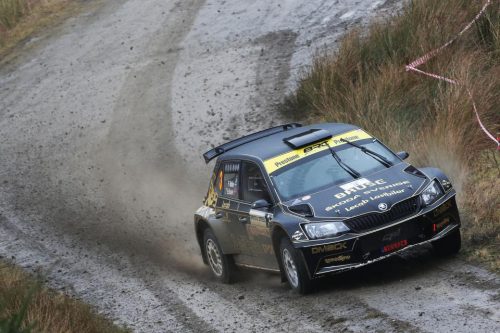