Four-time British Rally champion Keith Cronin put the hammer down for a fifth title bid at the weekend [27-28 May], taking his Volkswagen Polo GTi to a sensational Beatson’s Building Supplies Jim Clark Rally victory in the Scottish Borders.

Cronin and co-driver Mikie Galvin were a forced to be reckoned with all weekend long, opening up an unassailable forty second lead in their Pirelli-shod Polo over James Williams after the second stage on Friday night and the Irish pairing maintained that advantage over the second leg to take the win. Williams grappled with his Michelin backed Hyundai i20 to a maiden BRC podium in second, whilst local hero Garry Pearson rounded out the podium, another to claim his first podium in his Hankook supported Fiesta Rally2 in third.

The market town of Duns would return as the traditional host of the highly regarded event and nine brutal stages across Friday night and Saturday ensured it would be a challenging return to the rally for the BRC contingent, having been away since 2014.

It would be the eleven-mile Longformacus test run twice to open proceedings on Friday and Cronin was on another level. Stopping the clocks eight seconds faster than his Volkswagen Polo counterpart Osian Pryce, Cronin set his stall out early and repeated that feat on the second pass, going a staggering 23 sec quicker than anyone else to start the second day with 40 seconds in hand.

A trouble free and perfectly managed run over Saturday’s seven stages saw Cronin deliver a drive that was borne by his experience, to take his first BRC win since the 2017 Isle of Man Rally and thanks to a round one runner-up spot, the championship lead.

“It feels great, it’s so nice to get a BRC win again” said Cronin.

“Last year didn’t go one hundred per cent to plan for us. So, it was encouraging to see the pace at Clacton and after we started so well here [Jim Clark Rally], it was all about managing the lead.”

“We had to keep our pace up. Today we weren’t quite as flat out as last night, you just can’t let go of the concentration with the level of competition in the British Championship. You start hearing noises & listen out for punctures but it all came good, it was nice to get the win.”

Pryce was on Cronin’s tail on the first stage of the rally but suffered a puncture on the second. Failing to stop and change the flat would lead to exclusion by the event organisers, as he and O’Sullivan breached a regulation mandating the requirement to not compete on a puncture.

With Pryce out, Williams would enter into a fight with Pearson for second but the Hyundai driver had the upper hand. An impressive sight to behold over the unforgiving Scottish Borders stages, the Welshman took the fastest overall time on the final stage to seal the deal and along with co-driver Dai Roberts, took his maiden BRC podium in second place, going one better than his season opener in Essex.

Pearson would be balancing his local knowledge with the need for points after a round one non finish, and the Duns driver managed the prospect perfectly.  Enjoying his first outing on his home event in top-flight BRC1 machinery, his mood was reflected in his result, grabbing third place with Dale Furniss on the notes. Putting his Joker bonus points to good use, Pearson was another to secure a first BRC podium.

Meirion Evans was making his BRC1 debut on the Jim Clark and professed to be struggling to live with the front-runners in his Melvyn Evans Motorsport run Polo. As the miles passed, the confidence grew and fourth place was the reward for him and co-driver Jonathan Jackson.

Like many of the current generation of BRC contenders, Elliot Payne had not been to the Scottish Border stages before but coped perfectly with the pressure. Payne and Patrick Walsh overcame brake issues on Saturday to take their brightly liveried Fiesta Rally2 to fifth.

Ruairi Bell and Max Freeman fought back from a technical issue on stage one to take sixth in their Skoda Fabia whilst Jason Pritchard and Phil Clarke secured seventh, both crews recording their first BRC finish of the season.

The battle for the Junior BRC top spot went the way of round one runners up Eamonn Kelly and Conor Mohan. Kelly took his Fiesta Rally4 to a convincing lead after the second stage on Friday and despite the best efforts of his young rivals, was never headed.

Kelly elected to play his Joker for the chance to win additional bonus points and executed that plan to perfection, taking 30 Junior BRC points away from Scotland and the Junior BRC win championship lead.

Kyle White enjoyed the quickest time over the opener, but struggled in the dark with a trip into a hedge. Along with co-driver Sean Topping, White couldn’t quite match Kelly over the remaining test to take second in their Peugeot 208 Rally4. Johnnie Mullholland and Eoin Treacy rounded out the top three in their Fiesta after a positive run.

Kyle McBride and Liam McIntyre sealed the deal in the Academy Trophy, taking their Fiesta to a second win of the season and fourth Junior BRC crew in the process.

Making his return to the National Rally Title chase, Alan Carmichael bagged the top spot in his Hyundai i20. Guided by Arthur Kierans, Carmichael enjoyed a start to finish win after opening round winners Craig Jones and Ian Taylor suffered a boost issue on Friday night. Sadly the pairing would retire their Fiesta later in the day.

The British Rally Championship now heads to Wales as the Nicky Grist Stages hosts the first foray onto gravel this season in July. 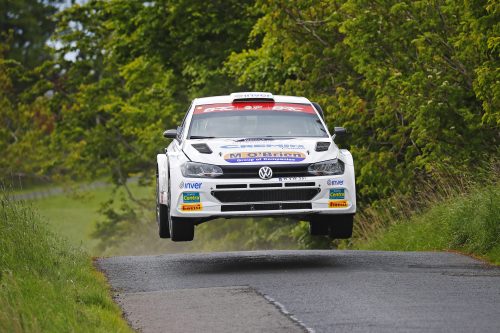