Contesting all seven events, Cronin’s Fiesta will be clad with DMACK tyres which claimed the championship laurels last year and sport an M-Sport livery which draws inspiration from those made popular by Ott Tänak and Sébastien Ogier in the FIA World Rally Championship.

As a three-time British Rally Champion, Cronin knows what it takes to excel in what is fast becoming one of the best proving grounds for rallying’s elite and will be keen to prove his potential as he makes his debut with the M-Sport team.

With more than 10 years of rallying experience under his belt, Cronin has contested a number of events and championships throughout Ireland and the United Kingdom as well as impressing on the world stage.

Debuting in his homeland in 2006, it did not take long for the Irishman to become a regular podium contender and he claimed his first British Rally Championship title in 2009. That success was followed by two further British Championships in 2010 and 2012.

In 2013, he ventured to the world stage and instantly impressed in the WRC 3 category – claiming victory at the event every driver wants to win, Neste Oil Rally Finland.

With no previous experience of M-Sport’s acclaimed range of Ford Fiesta rally cars, Cronin took to the wheel for the Carrick-on-Suir Wm. Loughman Forestry Rally earlier this month and secured a fine third place on his debut with the car.

Gaining more experience of his new charge in the lead-up to the Border Counties Rally in mid-March, Cronin will also contest the Malcolm Wilson Rally so as to familiarise himself further with the Fiesta in anticipation of an exciting new chapter in his career.

“I’m really looking forward to the season ahead and to be working with M-Sport as we chase success on the stages of the British Rally Championship,” enthused Cronin. “It’s a fantastic series which has really come into its own recently and I can’t wait to be back competing in the championship.

“I’m really excited about the Fiesta R5. I’ve not had a lot of seat time, but we’ll get a couple of rallies under our belt before the start of the season and hopefully it won’t take us long to find our feet.

“M-Sport are known for developing winning cars and my initial feeling has been good. The Fiesta is a great car to drive. It handles really well and I hope we’ll be able to challenge for some top results this year.

“It’s also great to have DMACK on board. Last year, they proved that their products are capable of winning rallies, and championships. The level of development that they are undertaking is really impressive, and it’s great to be involved.” 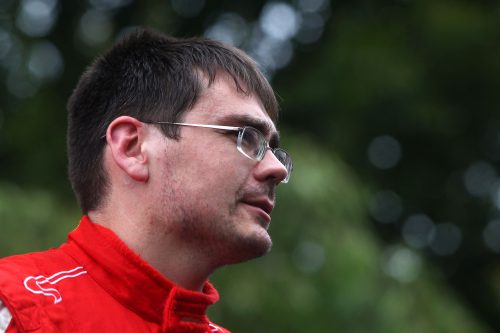