Keith Cronin and Mikie Galvin in their Ford Fiesta R5 hold the overnight BRC lead in Ypres, the fourth round of the Prestone MSA British Rally Championship. The M-Sport pairing  enjoyed a ding-dong battle with Fredrik Ahlin and Torstien Eriksen before the Scandinavian pairing crashed out on the final stage of the day. Cronin and Galvin hold a 20.8 second lead over Desi Henry and John Rowan in their Skoda Fabia R5 while Tom Cave and James Morgan make it three manufacturers in the top three, nestling their Hyundai i20 R5 into third, just 2.4 seconds behind the Fabia pairing.

Along with Ahlin, the biggest casualties of the opening day were Marty McCormack/David Moyinhan and David Bogie/Andrew Roughead. The Skoda crews were tipped for podium glory before both cars went off the stage.

In the Prestone Junior BRC, Chris Ingram and Elliott Edmondson take the bragging rights at the end of the first day in their Network Q-backed Opel ADAM R2. Snapping at the English duo’s heels are Callum Devine and Keith Moriarty in a similar ADAM R2 while relative Tarmac newcomer James Williams with the experienced Dai Roberts alongside round out the rostrum positions.

Josh Cornwell picked up where he left off in Scotland, commanding the Cadet Cup while John Morrison leads the National Rally Cup after the demise of Donnie Macdonald. David and Matthew White despite visiting a ditch earlier in the day kept their event finish hopes alive and will win BRC4 if they make it to the finish tomorrow.

The final day of Ypres Rally will see a further 12 stages to decide the winners of this historic event. 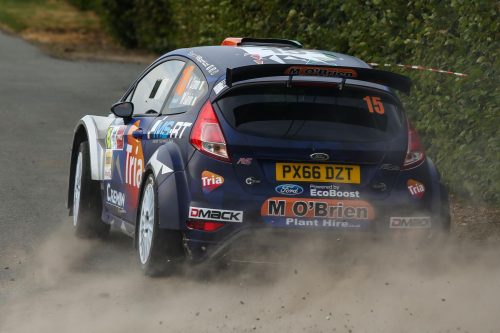