Cronin back to BRC for fifth title chase

Four-time British Rally Champion, Keith Cronin, is to return to the series in 2022 in a bid to equal the five-title tally of record holder, Jimmy McRae. Cronin will campaign a Volkswagen Polo R5 backed by Hankook Tire, and will be guided by Mikie Galvin in the co-driver’s seat.  The BRC gets underway next weekend with the tarmac surface Rally Tendring & Clacton in Essex, and six further rounds follow between then and October.

“We did five events with Hankook last year as part of a development programme,” explains Cronin.  “We’re doing the full championship this time, and I’m confident the work we did in 2021 will have paid off.  I’m looking forward to getting out there with the Polo, the top two in last year’s BRC drove them, they’re a strong, well-engineered car, and seem to be especially suited to rallying in this part of the world.”

Cronin had his debut in the Volkswagen on the recent Birr Rally, and he and Galvin were running in second place before a broken propshaft forced the Killarney & District Motor Club crew to retire.   “We entered Birr as a test session really, it was our first event in the car and our first dry tarmac rally since 2018,” said Cronin following the event.  “Obviously it would have been nicer to finish, but it’s better that the prop went there rather than in Essex next weekend.  Josh Moffett had won three rallies already this year, but we matched him on one stage and had an outright fastest time on another, so that’s a cause for optimism”.

Rally Tendring and Clacton is one of a number of closed-road tarmac rallies which have been inaugurated in Great Britain following the introduction of new legislation, and the inclusion of the Essex event in the British Rally Championship marks a return of the series to the populous south east for the first time in many years.  Two runs over a short spectator stage on Clacton’s promenade will open the rally on Saturday evening, with three loops of four stages following on Sunday.  “The stages are shorter than what we’d be used to in Ireland”, noted Cronin.  “There are fourteen in total, but the longest of them is 10 kilometres, and the total distance is only 85 kilometres, so everyone will have to be on it from the outset, there will be no room for cautious starts”.

There will be livestreams throughout the weekend on the British Rally Championship’s facebook page, @BRCrally.

Following the opening round, the BRC moves to Scotland next month for the Jim Clark Rally, also a closed-road tarmac event.  The series then switches onto gravel, for the Nicky Grist Rally in Wales and the Grampian Rally in Scotland during July and August.  September sees a return to tarmac for the Rali Bae Ceredigion in Wales, also a new addition to the championship.  Later the same month, the BRC moves north to the gravel of Trackrod Rally Yorkshire, with the Cambrian Rally in Wales marking the finale in October, also on gravel.

In addition to the primary support of Hankook Tire, Keith Cronin and Mikie Galvin are also backed by Cremin Coaches, Cronin’s HomeValue Hardware, Cronin’s Centra and Inver Energy.  Their Volkswagen Polo R5 is prepared and run by Tom Gahan Motorsport. 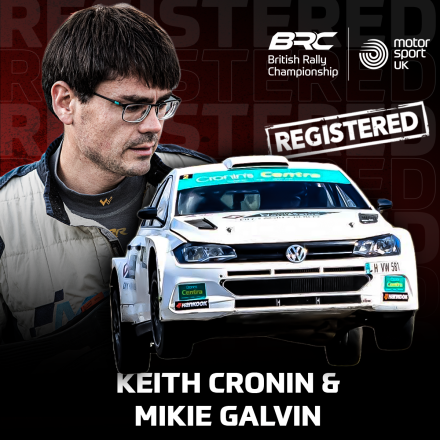