William Creighton and co-driver Liam Regan claimed their second win in the Prestone Motorsport News Junior BRC after two days of gruelling action on the Irish asphalt roads. The Peugeot 208 R2 crew last won on the gravel, on the Pirelli International Rally back in April and were determined to win their home event and strengthen their position at the top of the championship standings. A blistering run made Creighton untouchable as the Michelin-star notched up his fifth podium from six events.

The Northern Irish crew enjoyed a battle royal with fellow championship leader Callum Devine and Keith Moriarty on the opening day but Devine’s charge was halted on Stage 10 when the alternator cried enough – sending the Opel ADAM R2 driver into an early retirement and denying the fans of titanic tussle in the junior formula.

Norwegian star Oscar Solberg declared at the start of the event that he was going to take it easy and build his experience of Irish Tarmac. The Pirelli-backed driver ignored his own advice and pushed like Oscar only knows how. Right from the start, the Scandinavian gave it his all – bouncing the Ford Fiesta R2T between the grass banks and hedges. Solberg’s team, MH Motorsport certainly had its work cut out as they rebuilt the Fiesta throughout the event. With the car looking like a patch-work quilt at the end of the 130-mile marathon –Solberg and co-driver Patrick Barth finished second, claiming their first podium since their victory on round one – the Border Counties Rally.

Also in the fight for the rostrum positions were local stars Marty Gallagher with Dean O’Sullivan sat alongside. The 208 R2 crew were having their best showing in the BRC to date but a seized gearbox on the second stage of the final day put paid to their event and championship assault.

The championship fight will go to Rally Isle of Man with Creighton, Devine and Solberg all with a mathematical chance of lifting the Prestone Motorsport News Junior BRC title and scooping the £30,000 cash prize. The fight for the remaining spots will be fraught on the classic three-day island test. 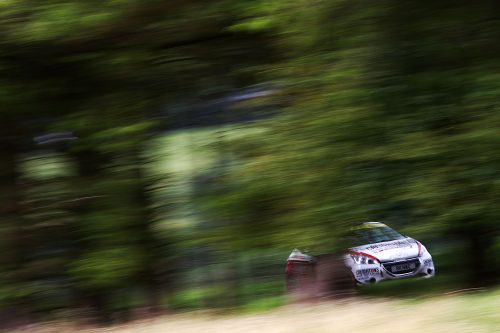