William Creighton has his eyes set on the Junior British Rally Championship title as the Peugeot 208 R2 driver returns to Britain’s premier rallying series with Liam Regan on the notes.

The Northern Irishman will contest his third season in the JBRC and the 21-year-old has been in the title hunt in the previous two seasons and is pumped-up ahead of the 2019 edition.

“It’s business as normal for us, we have the same package for a third year in a row. We have a good car, good team running it in DGM and a top navigator in Liam [Regan] so no excuses – we have to go and do the business on the stages.”

With the Cambrian Rally under a month away the Lisburn-lad has plenty of experience in his French pocket-rocket but any mileage is vital at this point in the season.

“We have just did an event at the weekend, which was the first round of the Irish Forestry Championship which has got me match fit ready for the Cambrian. We were first R2 car home so we are ready for a fight this year.”

And as for the calendar, the new-look BRC schedule is a massive hit for the young-gun.

“The mix of events this year is pretty special. The one-day rallies are always tough and you have to be on the ball all the time and then to have Ypres on the calendar is awesome. To spend a week in Belgium rallying is pretty cool.”

It all comes down to the big question. Target for the year. Simple. The big one!

“We know we have the pace and the past two seasons we have come into the final event of the year with a mathematical chance of the title so we know we can be there or there about this year. Unfortunately last year an off in Ypres and engine problems in Wales dented out hopes but we have put that behind us for this season. I am very competitive person so the target has to be the title. It’s going to be ultra competitive this year, probably more so than it has ever been, but we are certainly ready for the fight.” 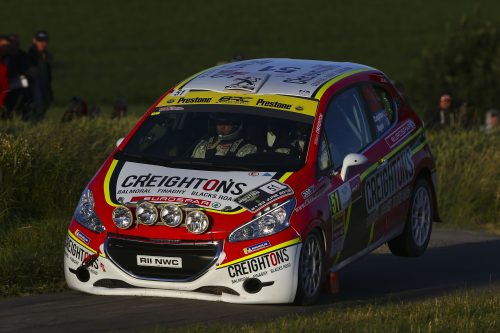