William Creighton finally managed to secure the coveted Junior British Rally Championship title after twice being the bridesmaid in his impressive career. Creighton chalked up four Junior BRC wins in 2021 and second place at the final round in Northern Ireland was enough to seal the deal, scooping a sensational 2022 World Rally Championship prize drive in the process.

Co-driver Liam Regan would also take the honours but for the second time in his career, after scooping the 2019 title when eventual winner Josh McErlean swapped co-driver’s early on in the season.

It wasn’t an easy ride for Creighton however, as BRC newcomers Eamonn Kelly and Conor Mohan fought till the last, storming to an impressive four podiums and one win during the season. Kelly showed a blistering pace on both surfaces, despite having never driven on gravel before embarking on his BRC campaign and took the fight to the wire.

But it would be advantage Creighton at the Ulster Rally and just a finish would be enough to take the title. He duly delivered.

“I think that was the longest stage of my life,” said Creighton at the finish.

“I’m so delighted with the result and to finally get the Junior BRC title means so much. We made it quite hard for ourselves this season after not finishing the Nicky Grist so we knew we had to score maximum points on every other round. I’m just so happy to get this result today, I didn’t even want to think about the WRC prize to be honest but now I just want to enjoy this moment, it’s been a long time coming.”

That WRC prize is a whopper too; thanks to Hyundai Motorsport Customer Racing, Creighton will contested a round of the 2022 championship in an i20 N Rally2, arguably one of the biggest prizes in domestic rallying in the world.

Kelly could hold his head high however, taking second in the championship on his debut season and stamping his mark on the stages as one to watch for the future.

Historically the Junior BRC has always seen sensational competition and 2021 continued that theme, with any one of the 16 registered contenders likely to vie for a podium slot. Finlay Retson and Rhys Stoneman secured two podiums during the year but their campaign was mixed with misfortune and fell away from the title battle towards the season close.

A sensational season from BRC Academy Trophy champions Johnnie Mulholland and Calum Maguire saw them take fourth place in the standings despite using older specification machinery. The pairing also scoop free entries to the 2022 Junior BRC rounds so expect them to be challengers next season.

Kyle White was another to shine in a debut year, hauling his normally aspirated Peugeot 208 R2 to some stellar results with Sean Topping in the co-drivers seat. Another to suffer a cruel run of luck, three non-finishes kept them away from the title fight – this time.

Looking further down the points standings and each one of the names will have a story to tell about their season and the impressive Juniors performed impeccably throughout. The 2022 championship is likely to be yet another thrilling offering as the young chargers battle it out on one of the most highly regarded championships in Europe and beyond. We can’t wait. 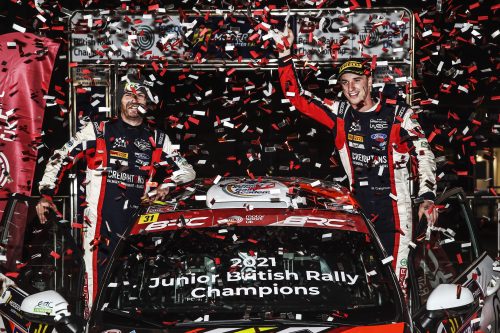