William Creighton sits a top of the Peugeot 208 tree after five rounds of the Prestone MSA British Rally Championship.

The Northern Irishman is making a strong statement in his first season in Britain’s premier rallying series. The Ulsterman has taken three podiums and a breakthrough win on the Pirelli International Rally to joint-lead the Prestone Motorsport News British Rally Championship.

Meirion Evans is desperately seeking his first outright victory and his first parts voucher in the Junior BRC. The Welshman, with Jonathan Jackson calling the notes, has endured a strong season to date. Two podiums mid-season and a string of fourth place finishes have nestled the 208 pair into third in the standings. If everything goes Evans’ way a win could well arrive come the end of the season.

Marty Gallagher is building momentum with every round. A podium on the Scottish Rally and strong pace on the other events has made the young Irishman a threat on every surface. Having led parts of the Nicky Grist Stages, Gallagher and navigator Dean O’Sullivan are hungry for success and a move back to the Tarmac of Ulster and the Isle of Man will see them as a dark horse in the fight for outright victories and in the title race.

Other drivers to benefit from the Race and Rally prize incentive include Dean Raftery on Round one and Cameron Davies who took the junior class honours and the Peugeot Sport prize on the Scottish Rally back in May. 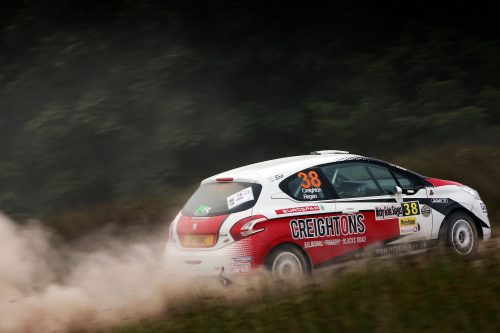