Creighton nominated for Young Rally Driver of the Year

21-year-old William Creighton has been nominated for this year’s Motorsport Ireland Billy Coleman Young Rally Driver Award for his performances in the period May to July.

William started his motorsport career in karts, becoming Ulster Karting Champion in 2008. In 2013 he moved into J1000 rallying, securing the Northern Irish and British titles in 2014. Following those triumphs, William moved up to the R2 category, starting in a Ford Fiesta before moving to a Peugeot 208 which he has been campaigning since mid-2015. He has also forged a long term partnership with respected co-driver Liam Regan with the pair having contest over 50 events together.

A final year Business Management Student in Edinburgh, William also works in the family filling station, garage and vehicle recovery business when he is not studying or competing. His primary sponsor is Creighton Group and William would like to express special thanks to his family and all the team at David Greer Motorsport who prepare and run his car.

This year’s Billy Coleman Award will see 3 qualifiers selected from the following monthly groupings; January-April, May-July and August-October. These nominees will be joined by the highest placed eligible drivers from both the Junior sections in the Triton Showers National series and the Valvoline National Forestry Championship in both class 16 and 16A, the highest placed eligible driver in the dual surface Motorsport Ireland J1600 Junior Rally Series and a wildcard selection, meaning that up to 9 drivers may be nominated for the award in 2019.

The winner of the Motorsport Ireland Billy Coleman Young Rally Driver of the Year Award will now receive €100,000 worth of support to contest rallies nationally & internationally in 2020. Coupled with Sport Ireland and Motorsport Ireland’s €50,000 investment, a further €50,000 has been pledged by the Team Ireland Foundation. The award winner will also receive the assistance of Billy Coleman co-ordinator, Sean McHugh. Additional support from the Motorsport Ireland Rally Academy as part of a training and development plan to further the winners’ career will also be available and the winner may apply for funding for a second year of support upon satisfactory performances in their award winning year. Both of the award runners up will receive support to compete in stage rallies at home and abroad up to an amount of €15,000 each. 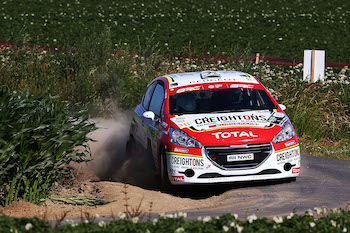