Last seasons Junior BRC runner-up William Creighton will return to the Prestone MSA British Rally Championship in the hope to go one better in 2018.

The 20-year-old William Creighton has signaled his title ambitions ahead of a full season in Britain’s premier rallying series. He will return to the stages in his potent Peugeot 208 R2 and will once again be expertly guided by Liam Regan in the co-drivers seat. With the clock ticking ahead of the first round, Creighton is itching to get going.

“I have just come back from a trip to Monte Carlo and I have the rallying bug in a massive way,” enthused Creighton.” I cannot wait to comeback to the BRC for a full on assault. We looked at all out options for this year and it was a clear-cut decision to return to the BRC compared to anything else. The level of competition and number of quality drivers really helped bring me on last year.”

William was mister consistent in 2017 as the young Northern Irishman notched up five podiums along with two wins in his first foray into the BRC. Playing down his chances, the Peugeot 208 driver stated he would feed himself into the gravel before stronger pace on the asphalt in the latter pat of the season. Underestimating his ability, Creighton bagged a podium on round one before sealing his first win on round two, to make everyone sit up and take him seriously as a championship threat.

“We were surprised at how quick we would be and how close to the pace we were. The Red Kite Stages before our BRC campaign was a real test as we went up against Meirion [Evans] in his own backyard. Unfortunately he retired early, but it was great day to learn about the car on gravel. Then going into the night stages on the Borders was a real eye opener.”

A year on and as championship runner-up last year, Creighton goes into the new season as the man everyone will want to beat. With the target, William was quick to focus on his own campaign.

“I try to block these things out but naturally I could be the favourite and I will be of course going for the title. Like last year I will be focusing on each rally and I am pleased to have Liam [Regan] and the whole team back together as keeping the consistency will be important for a title assault.

Asked about whether he was looking forward to a new season. The Ulsterman was very quick to answer.

“ I am so excited to get back onto the stages and this years season will be quite something. Ypres in the summer, a WRC round at the end of the year to look forward to as well as our home rally, the Ulster. It’s going to be another tough year on some proper classic stages.” 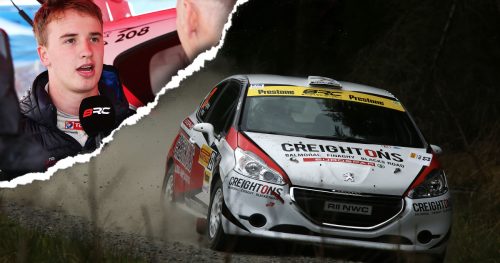