Antrim and Newtownabbey Borough Council have announced their sponsorship for the 2018 John Mulholland Motors Ulster Rally.

The John Mulholland Motors Ulster Rally will rev into the Borough on Friday 17 and Saturday 18 August. The drivers will speed off from the Antrim Castle Gardens and will stop at major controls in Ballyclare on Friday and Randalstown on Saturday. The two-day rally is part of the major European, British and Irish rally series.

The Mayor of Antrim and Newtownabbey, Councillor Paul Hamill, commented: “It is fantastic news that we are supporting the rally and bringing it back to the Borough. The last time we hosted the event in 2012, almost £1million of economic benefit was generated and we hope to increase on this for 2018. I hope everyone is geared up for this action packed weekend.”

Robert Harkness, Event Director commented: “We are delighted with the terrific support from Antrim and Newtownabbey Borough Council and it is great to see the rally returning to the Borough. We are looking forward to a large entry as the route takes in some of the most challenging roads in County Antrim. We also encourage plenty of spectators to join us for the start and finish in the award winning Antrim Castle Gardens”.

John Mulholland, John Mullholland Motors commented: “I am thrilled that the Ulster Rally is returning to our home Borough and we are sponsoring this prestigious event. It is always fantastic to help raise awareness and promotion of motorsport in Northern Ireland. I also compete in the rally and I’m looking forward to the challenging County Antrim stages.”

For more information about the event, including details of the stages and times, visit www.ulsterrally.com 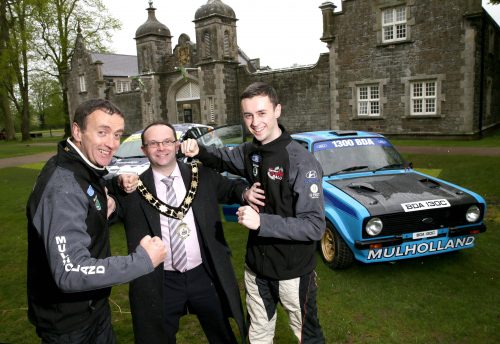