The spectacular Toyota GT86 CS-R3 will return to the stages this season within the BRC from the second round of the championship – the Pirelli International Rally and will be driven by Will Corry with Brynmor Pierce on the notes.

After a brilliant first season for the car run by Cornwall-based RallyPrep under the guidance of Neil Yates, it will once again be crewed by Belfast’s Will Corry and his Mold based co-driver Brynmor Pierce. Rally Prep are Toyota Motor Sport Group’s (TMG) official UK distributor and launched the new livery supplied by Blackwater Graphics on the BRC and Wales Rally GB stand at the Autosport Show in January.

The team is acknowledged to have been the most successful R3 GT86 crew in Europe during 2016 and are looking to build on that success.

“2016 was all about developing the car for UK stage conditions and learning what was a brand new chassis,” explained Corry. “Last year was above and beyond what we’d hoped for and we have set a benchmark that we need to build on and surpass in 2017. With the support of our family business Corry Motorsport and our other partners we can’t wait to get going, Ypres is getting me very excited already.’’

The team will be missing round one as the Brick & Steel Border Counties clashes with Corry’s racing commitments. The Northern Irishman will be racing an Austin-Healey Sprite at the 75th Goodwood Members meeting on the same weekend.

“I’ll be keeping an eye on the BRC results whilst I’m trying to claim some silverware at Goodwood!”

Corry and Pierce scored the first ever outright victory for the GT86 CS-R3 on last August’s National A Ulster Rally whilst running on DMACK tyres. Now registered for the BRC, the team are delighted to be teaming-up with DMACK again for the whole of their 2017 campaign.

The car is unquestionably a firm favourite with spectators, the normally aspirated engine and sideways antics make for a great spectacle on the stages. Whilst 2016 was a season of development for the only homologated rear-wheel-drive rally car outside the GT class, Further updates have been planned ahead of 2017.

‘’Our work last year has been incorporated into an evolution in several areas of the car and we have multiple FIA homologated upgrades due for approval in April which will move the car forward again,” explained Neil Yates from RallyPrep. “In particular TMG have significantly enhanced the torque curve which will be a big benefit when trading times with the other homologated R3 & R2 competition – and allowing us to take the fight to the big motor modified boys on National status events.’’

Racewear is again supplied by Italian manufacturer HRX through it’s UK distributor www.hrxstore.co.uk whilst additional backing comes from a new event , The Supercar and Rally Show www.tsars.org at Bangor-On-Dee.

More Toyota news is on the horizon. A clubman specification Toyota GT86 built and developed by RallyPrep is scheduled to make an appearance later this season in the National Rally Cup, proving that it is an affordable and accessible modern rear wheel drive rally car. 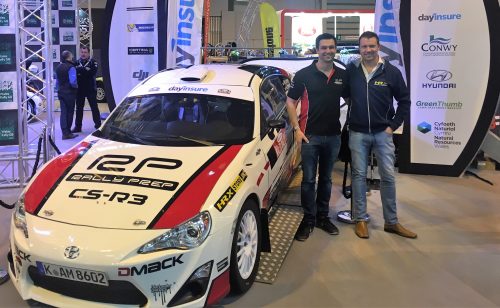