Reining Cadet Cup Champion Josh Cornwell has confirmed his step-up to the Junior BRC aboard a Peugeot 208 R2 – committing to the Prestone MSA British Rally Championship for 2018.

Cornwell returns to Britain’s premier rally series to tackle the seven-round series at the wheel of a Peugeot 208 R2 with co-driver Cliona Collins sat alongside. The 19-year-old secured the inaugural Cadet Cup last season, dominating the series by claiming five wins from six events contested in his Ford Fiesta R2.

“After a part-year in the BRC in 2016, I went into last season with some confidence of taking the title as I already had a year of experience compared to the other drivers.

“The Cadet Cup really helped me, as it enabled me to show my potential and show progress to get my name out there and that has certainly helped me coming into this season.”

With the championship success came the reward – free entries into every BRC round in 2018, something which Josh is grateful for coming into the new season.

“The prize is really going to help. It’s always tough to get the funds together for any young driver and having that all paid for is a real weight off the mind. It’s a fantastic prize enabling me to focus my budget on other areas.

“I would really recommend the Cadet Cup to anyone. Not only did it help me but it was great to see the level of competition rise with every event from everyone, and its pleasing to see people like Alex [Waterman] and Nabila [Tejpar] also step up as I think a year in the cadet’s did them the world of good as well. The free entries was a great prize for me and it’s great to see the prize on offer again this season.”

With the championship sealed on the Ulster Rally, Cornwell and new co-driver Cliona Collins harnessed a Peugeot 208 R2 for Rally Isle of Man at the end of the season. With Cornwell’s confidence increasing with every stage mile, a full time switch was inevitable for the Dorking-based driver.

“It’s an absolutely mega car, with its extra power. Going through the gears as it pops and bangs – it puts a massive smile on your face.

“It will be a big step-up to the Junior BRC – the level of competition is unreal. Cliona and I will look to keep on the coat tails early in the season and by Ypres or just after we want to really be in the mix, right up there.” 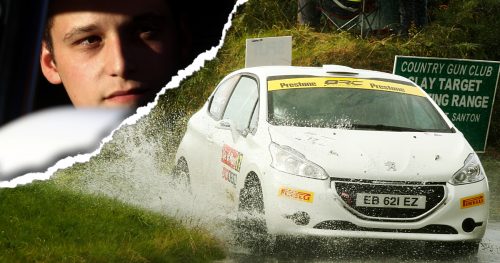